She’s a doting mum to her four boys.

And Coleen Rooney, 35, proudly shared a sweet snap of all her children together on Monday- with her sons Klay, eight, and Kit, five, donning Manchester United shirts.

The new family picture comes after Klay jetted to Poland with his dad Wayne, who played for The Red Devils between 2004 and 2017, for the Europa League final. 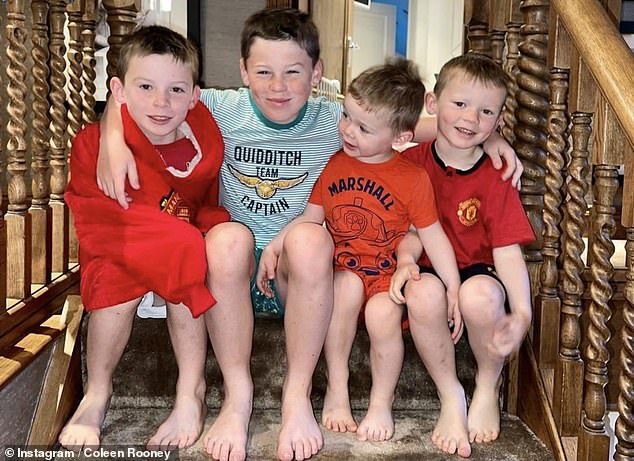 Coleen and Wayne’s sons all beamed smiles in the lovely snap, with the eldest Rooney child Kai, 11, wrapping his arms around his younger siblings.

The big brother stood out in a fun Harry Potter shirt which boasted a white and green stripe as well as the words Quidditch Team Captain across the front.

Klay also seemed happy to be home from his quick trip abroad and wrapped a cosy Manchester United jumper around himself as he grinned with his family members.

While the younger Rooney lads also looked adorable, with Kit wearing a football top and shorts while Cass, three, donned a Paw Patrol tee with Marshall the dog on. 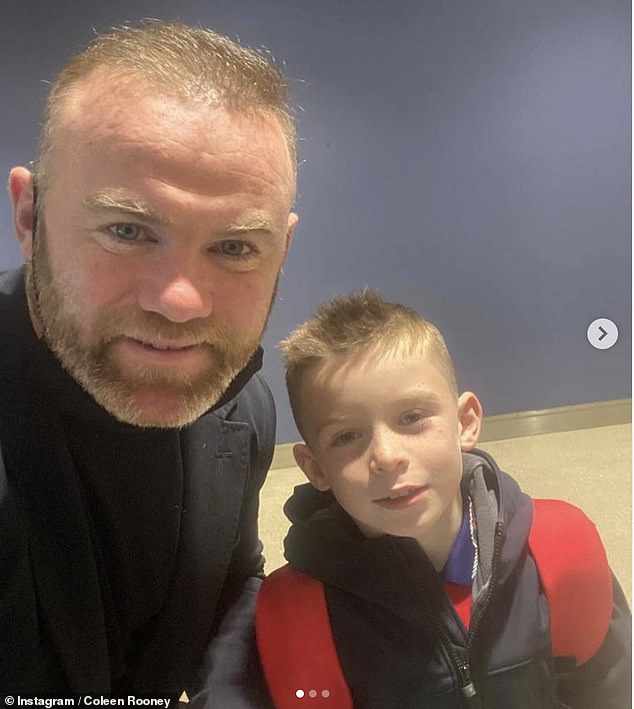 Boys trip: The new family picture comes after Klay, eight, jetted to Poland with his dad Wayne for the Europa League finale

Elsewhere on Monday, Wayne took to social media to show he was enjoying some quality time with his children and playing a football game in the garden.

Kai and Klay could be seen taking part in the board game, with Wayne writing in the caption that they are ‘getting excited’ for the Euros.

The proud dad also joked that he and his fellow football stars Rio Ferdinand and Steven Gerrard had made his sons’ team. 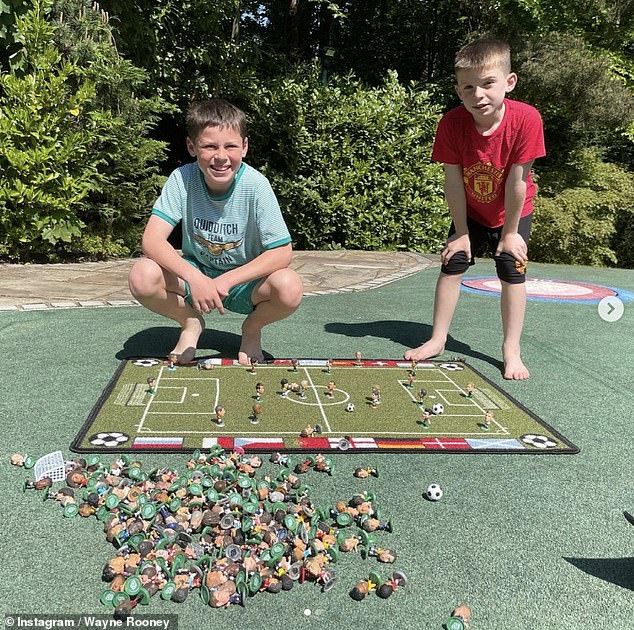 Quality time: Wayne also took to social media on Monday revealing Kai and Klay had made their own team ahead of the Euros 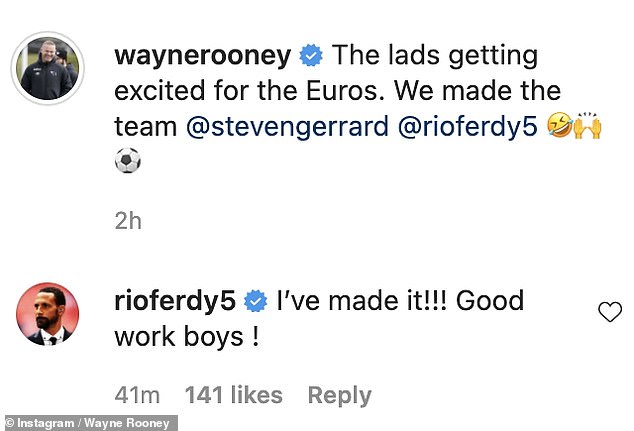 Great news: The father-of-four declared that Steven Gerrard and Rio Ferdinand had made the team, which Rio seemed very pleased about in the comments

Taking to Instagram on Wednesday, doting father Wayne, 35, shared a snap of himself smiling as he sat next to Klay on a plane, writing: ‘Next stop, Poland.’

Behind Wayne two other passengers could be seen, however the flight appeared otherwise empty.

The father and son trip came after the family rang in Klay’s eighth birthday in style with a lavish football-themed balloon display earlier in May. 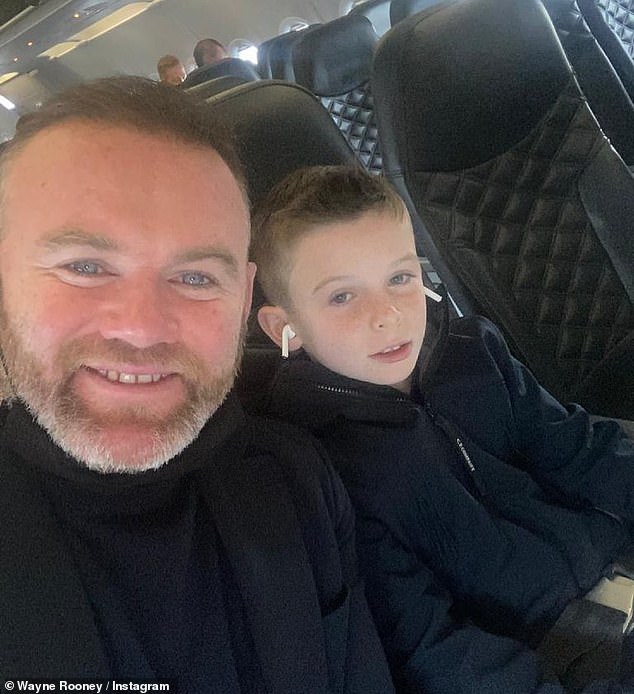 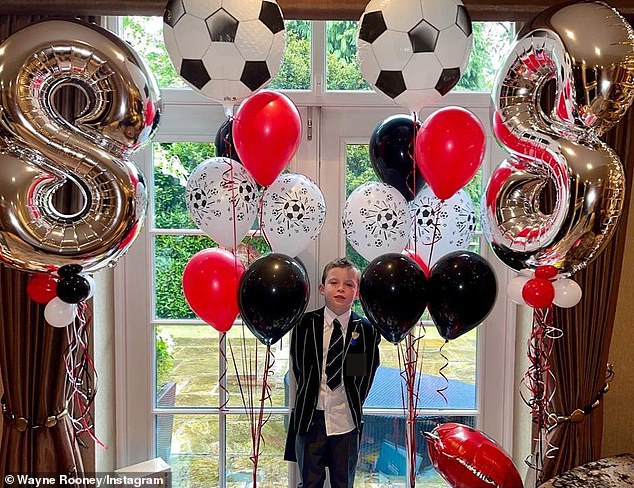 The proud parents took to Instagram at the time to post a collection of sweet photos to mark their second eldest son’s milestone.

Coleen posted a montage of throwback snaps with her little boy and penned: ‘Happy Birthday to our funny man Klay. Thanks for being you and such a caring brother. Enjoy your special day. Love you always ❤️.’

It comes after MailOnline revealed that Wayne and Coleen are finally set to move into their £20million mansion, ending four troubled years of delays and planning rows – and they celebrated with a date night.

The couple, who recently enjoyed a luxury mini break to Scotland’s five-star hotel Gleneagles, celebrated the end of the football season with Wayne leading Derby County to narrowly avoid relegation – and the ease of lockdown restrictions. 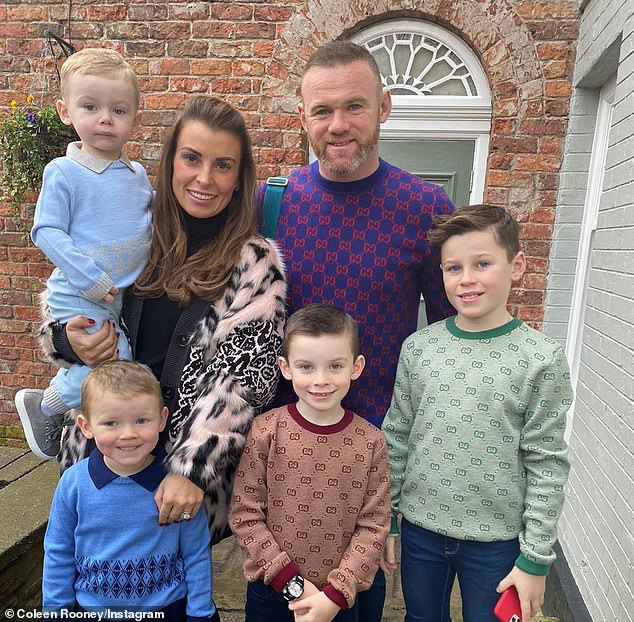 Happy families: Wayne and Coleen are proud parents to their sons, often sharing sweet updates on social media (pictured in May 2020)

The couple took time off from their family time with their kids for a romantic meal at the hotel’s two Michelin star Andrew Fairlie restaurant – with Coleen posting the pictures of their grown up night out on her Instagram.

MailOnline revealed that the Rooneys had another special reason to celebrate as the saga of their dream home build is all but over and they are soon to finally move in, more than a year after schedule.

The former England captain, wife Coleen and four sons have been relieved to be able to wave off all but one of the diggers which became a familiar sight around the mansion.

The dozens of builders, developers and designers have upped and left with sources stressing only ‘a few minor tweaks’ need to be carried out before the Rooney’s move into the dream home.

‘Even the road leading to the house has been swept and dusted off. The water and power are on and it is ready’ said a source. 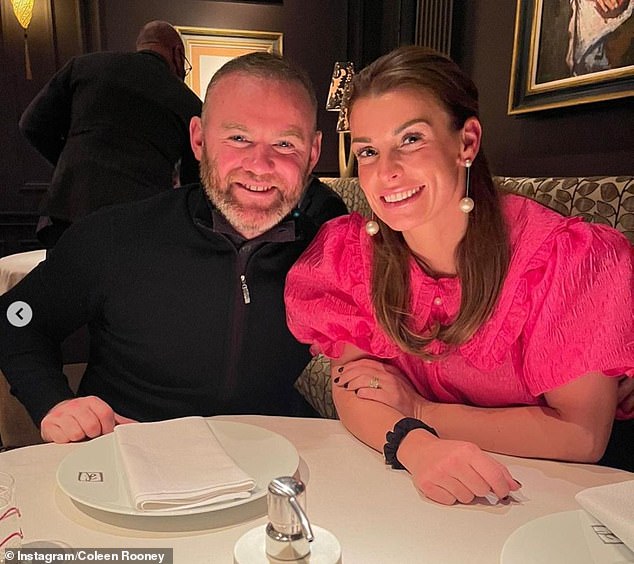 Good times: It comes after MailOnline revealed that Wayne and Coleen are finally set to move into their £20million mansion and they celebrated with a date night (pictured)

When the removal vans arrive, possibly during their kids’ school half-term break, the Rooneys will be able to enjoy the full luxury of the multi-million pound development of the home which they bought in 2017 for £4 million.

But they will have to contend with increased noise levels and groups of walkers who can ogle the mansion from a public footpath close-by.

Their home – dubbed the ‘Morrisons Mansion’ – due to its similarity to the supermarket chain, is on the flightpath to Manchester Airport with planes flying directly over it, as revealed by MailOnline.

Work ground to a halt for several weeks during lockdown as building materials deliveries stopped during the pandemic.

They had originally pencilled in January of 2020 as their moving in date. 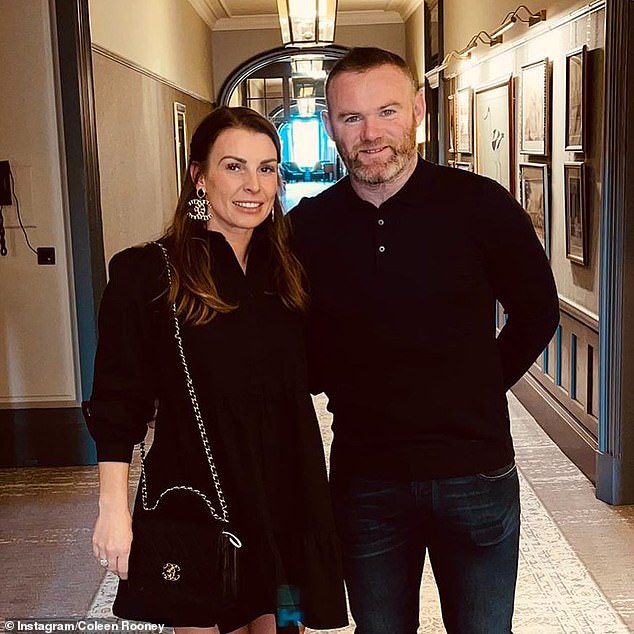 Dinner date: The couple enjoyed a luxury mini break to Scotland, celebrating the end of the football season and the ease of lockdown restrictions with a luxurious stay at the five-star hotel