Even for a race with such a rich history, this should go down as one of the great days at the Tour de France.

There was a second stage win for Simon Yates, a first sign of human weakness from Julian Alaphilippe, not to mention further difficulties for Geraint Thomas before the defending champion displayed a bit of Welsh grit over the final two kilometres and regained much of the time he lost to the race leader the previous day.

Afterwards he suggested he could have gone earlier but, amid the confusion created by the decision to have joint-leaders at Team Ineos, he felt he could not run the risk of assisting Alaphilippe in reducing any time lost to Egan Bernal. 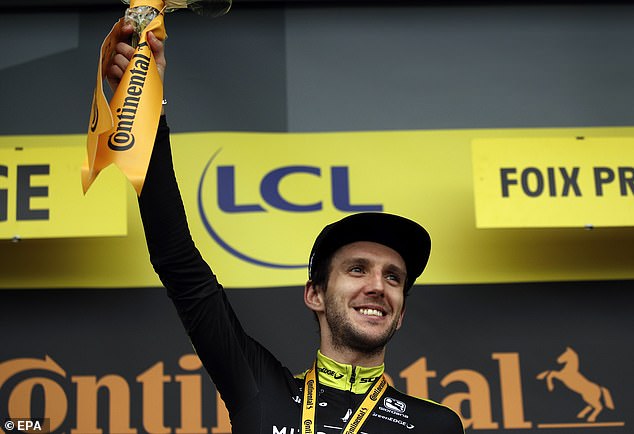 ‘I’m stuck between a rock and a hard place,’ Thomas complained. ‘I wanted to go, I had the legs to go, but I wasn’t going to chase down Egan with Alaphilippe on my wheel.’

The final ascent to the rain-soaked summit of Prat D’Albis will be most memorable, however, for another powerful display of climbing by Thibaut Pinot, who right now looks like the rider most capable of catching Alaphilippe before Paris.

The strongest man on the Tourmalet was the strongest again here, destroying the main contenders with a series of attacks that, one by one, killed off the opposition.

Only Bernal remained with Pinot with some 3.5km to go, and the 29-year-old Frenchman saw off the young Colombian with a surge that saw his speed rise to 28.2km/h despite the punishing gradient.

It is mesmerising stuff; the sight of this stylish, super-light climber rising out of his saddle and putting his rivals deep into the red in a manner that is even making French journalists abandon any sense of press room decorum and whoop and cheer.

But it is also a race that, increasingly, has this country fast heading for a national state of hysteria, given the proximity of five riders to race leader who was clinging on to a barrier after finally crossing the finish line and rested his head on the table, to convey his exhaustion, when he then appeared for the yellow jersey wearer’s press conference. 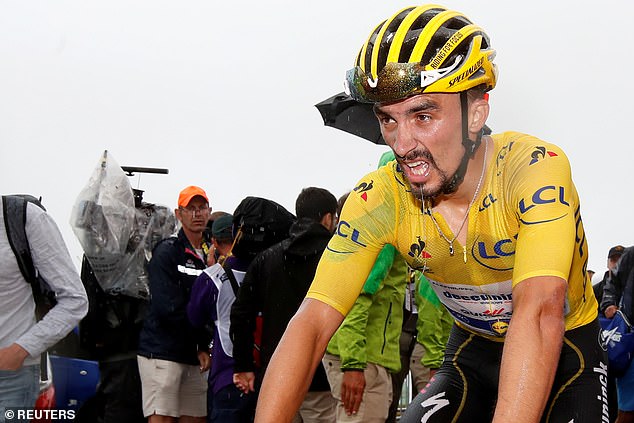 Rarely has a Tour been closer and more unpredictable, with Alaphilippe still enjoying a 95 second advantage over Thomas going into the second rest day but just 39 seconds then separating Thomas from Emanuel Buchmann in sixth.

A rider who lost 100 precious seconds to those crosswinds earlier in this race, Pinot is now fourth just 110 seconds down.

But he has the pedigree of five Grand Tour top 10 finishes, including a spot on the Paris podium in 2014, and at this moment he, rather than Alaphilippe, seems best equipped to become the first French Tour winner since 1985.

Those three days in the Alps are going to be utterly fascinating, for sure, but the final day in the Pyrenees, with more than 4000m of climbing, was terrific.

Yates was some distance up the road and Mikel Landa was chasing when the main contenders arrived at the base of the final 11.8km climb together. 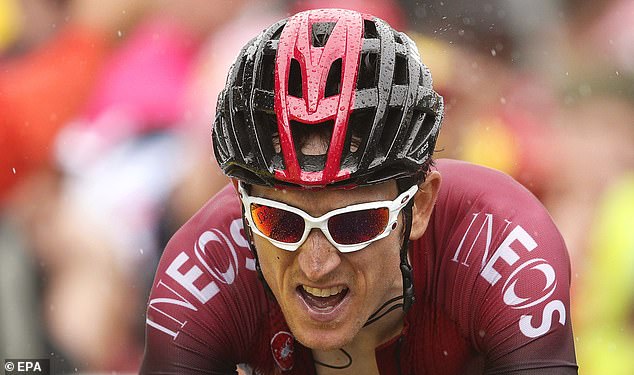 Rarely has Tour been closer and more unpredictable, with Geraint Thomas 95 seconds behind

It was Pinot’s FDJ team-mate, David Gaudu, who was first to step up the pace, burying himself to launch his dashing compatriot with the designer stubble.

Thomas was among the first of Pinot’s victims, and it was not long before only Bernal, Alaphilippe and Buchmann were still with him. Then, however, Alaphilippe cracked, with Buchmann going next and then Bernal.

Predictably, the Thomas group then picked up Alaphilippe and credit to the 33-year-old Brit for finding something in his legs to attack the Frenchman and take back 27 seconds. Even if he did then complain of a mess seemingly of Team Ineos’s own making.

There is certainly more harmony among the French, despite representing different teams.

‘It’s not a surprise that I’m starting to struggle,’ said Alaphilippe. ‘I didn’t have an ambition to win the Tour. The third week suits Pinot and if I lose the yellow jersey I would like him to take it.’

Erling Haaland is aware of the marginal gains needed to evolve...

July 23, 2021
It was a deflated Erling Haaland who faced the Norwegian television cameras early on in the most recent international break. His team had...