The race for the big prize might have failed to ignite here on the first day in the Pyrenees but there was no shortage of fireworks, first in the form of Rohan Dennis’s sudden abandonment and then a most unexpected sprint victory for Simon Yates.

Last year’s winner of the Vuelta says he is at the Tour to assist his twin brother, Adam, but he was part of a three-man breakaway that were first to attack the final descent into the beautiful town of Bagneres-de-Bigorre and a burst of acceleration into the final corner proved a masterstroke.

With less than 200m to go Yates had both the necessary momentum and the strength to hold off the challenge of Pello Bilbao and Gregor Muhlberger to take stage 12, no doubt lifting the Englishman’s spirits after what proved a difficult Giro in May. 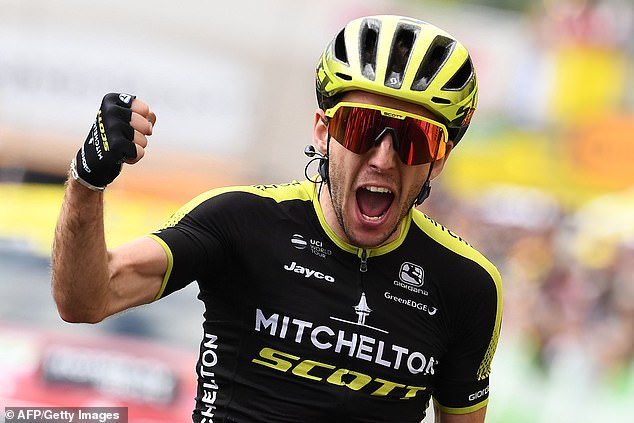 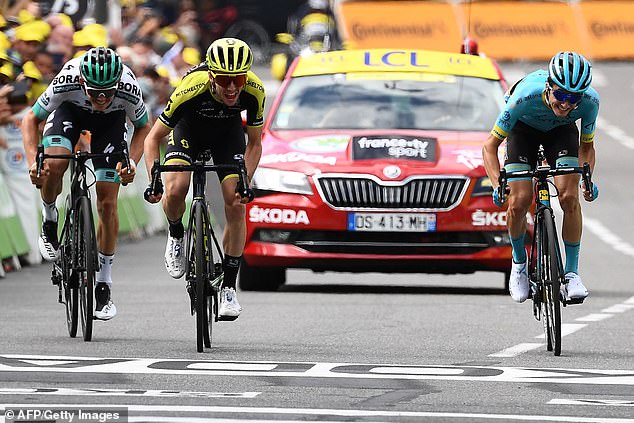 A good while before Yates became the 14th different Brit to win a Tour stage, Dennis, the world time trial champion and favourite for Friday’s individual TT in Pau, had something of a meltdown, climbing off his bike 80km from the finish after apparently rowing with the occupants of a team car.

Bahrain-Merida officials suggested in a social media post that they were unaware of the reasons and were investigating as a consequence, although there were mutterings afterwards that he was unhappy with his TT bike and the skinsuit he was due to wear.

A team official said he was unaware of a problem with the bike, claiming the whole team were ‘confused’. So confused, it turned out, they then crashed their bus into a rival team vehicle.

It leaves Friday’s 27km race against the clock wide open and all the more intriguing given the performance of the main GC contenders here on Thursday, a lack of attacks leaving Julian Alaphilippe in yellow for the 100th anniversary of the maillot jaune. 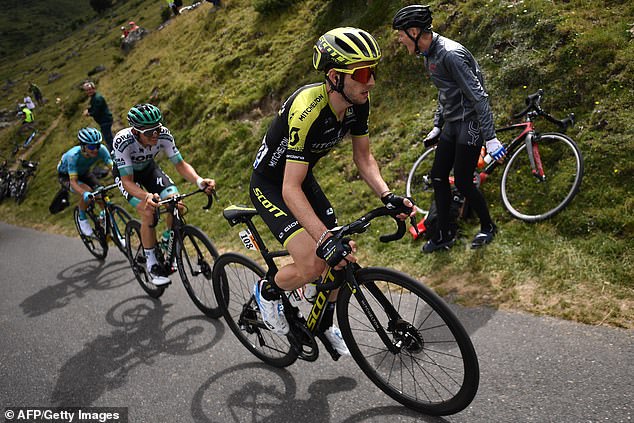 The trio formed a breakaway from the main group, who were nine minutes behind in the end

Clearly they were saving themselves for the TT as well as the rather more gruelling mountain stages that then follow.

‘Now it’s about the next big three days,’ said Geraint Thomas. ‘Everyone is mindful that they are going to be significant for the GC and they were waiting for that.’

It will be interesting to see just how committed Thomas and his INEOS team-mate, Egan Bernal, are on Friday.

‘Dennis and Van Aert are my favourites,’ said Thomas, only to then be told about Dennis. ‘Ah ok, Van Aert then.’