It is a clear mark of how standards have soared under Gareth Southgate that he effectively dismissed England’s biggest achievement in 55 years on Monday.

‘What got us to the final of the Euros won’t be enough,’ explained the England manager. ‘We know we want to keep evolving.

‘We knew we wanted to evolve after the World Cup. Same after the Nations League. Now we want to do the same post-Euros.’ 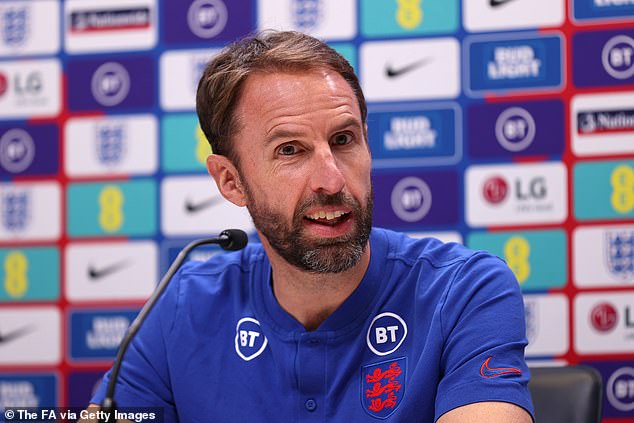 There was a time when reaching a World Cup semi-final and finishing runners-up in a European Championship would have been good enough for our national team. But not any more. Not under Southgate.

England’s players should relish that challenge, not wilt under the burgeoning expectation. The squad is awash with Champions League and Premier League winners, after all.

Execution, of course, is where the difficulties lie: where can England find that extra few per cent to end a trophy drought that will be in its 56th year by the time the World Cup comes along in the winter of next year?

Squeezing an extra attacking player into his starting XI, particularly against the world’s elite nations, may appear a risky way of getting England over the line. But surely it is a risk worth taking.

With everyone fit, Southgate’s current first-choice midfield three appears to be Kalvin Phillips, Declan Rice and Mason Mount. But is there an argument for Southgate to consider ditching either of his two defensive midfielders in favour of a more forward-thinking player?

Phil Foden’s magnificent performance against Andorra in a central midfield role on Saturday has led to fresh calls for the Manchester City star to be a guaranteed starter.

So, Rice, Mount and Foden, how does that sound? Or Phillips, Mount and Jude Bellingham?

‘I think fitting an extra attacking player into the team is what we have got to find out over the next 12 months,’ said Southgate. ‘What balance for what games.

‘If I think about leading into the Euros, in the autumn prior to that we had any number of players missing for different reasons.

‘So there are lots of ideas that you might have and things you would like to see and try, but when you are going into a major tournament it is difficult to try them because the consequence of it going wrong is you are out straight away. 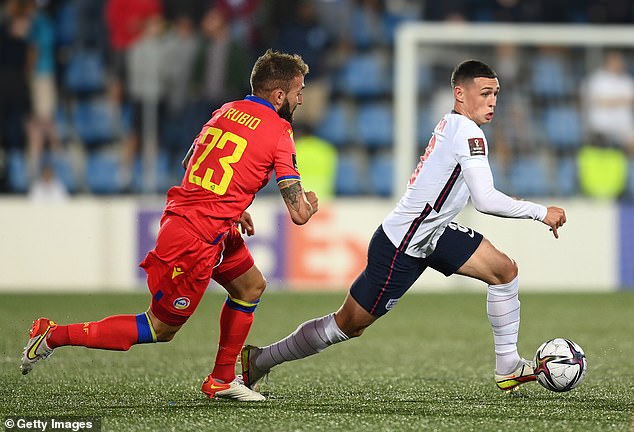 ‘When I joined the FA, I knew there were different sorts of players coming through our academies and we wanted to change the perception of English players and coaches. 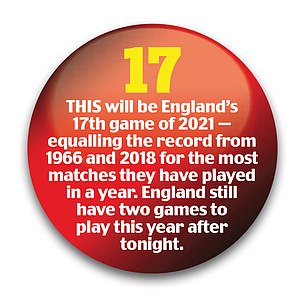 ‘We know that we have got some outstanding players — and we have always had them. We have had Champions League winners, Gerrards, Beckhams, Scholeses, Rooneys, so we can’t say we have never had good players.

‘But some of the ability of modern players to play in a different way across Europe, not just our country, is fascinating to see. The tight possession games that are so common in training from when they are a young age, you now have such a level of technical quality across Europe. Our young players are no exception to that.’

Southgate will inevitably be tempted to deploy two holding midfielders against the elite nations. After all, it has served him well so far.

No matter what path Southgate decides to take, you would imagine Rice will be part of England’s first-choice midfield. One of the heroes of an unforgettable summer, 22-year-old Rice has established himself as the engine of Southgate’s side.

‘I was talking to Declan about how I’ve viewed him this season and how he’s felt himself going back to his club having experienced the biggest possible matches,’ said Southgate. ‘Until you are in those moments, you don’t know what that’s going to feel like.

‘The confidence you gain is hard to measure. 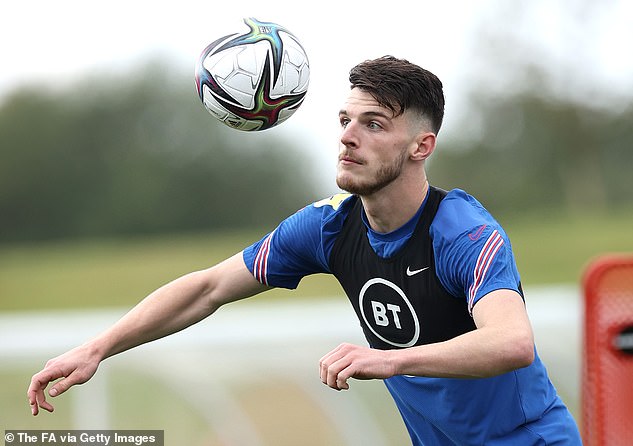 ‘The interesting thing is that I spoke to him when he was making the transfer from the Republic of Ireland and we had seen things in him which we believed could be helpful to us as a country, but also you could tell his mentality was one where he wanted to learn and improve and test himself.

‘He is a sponge for tactical information and observations on his game and he is desperate to be the best he can be. Even though he is a young player he has got tremendous leadership qualities. He is captaining his club at a young age.

‘So you can see all the signs of what might be possible. There are the experiences he has been through now but also he is getting more mature, broader with his outlook and because of his mentality he is going to improve even more.’