Home Cycling France shuts down a nuclear power station in case it overheats in...

Europe is scorching in the second heatwave of the summer this week as those in France brace themselves for record-breaking  temperatures.

Blistering heat in Western Europe has forced a temporary shutdown of a French nuclear power station and will test competitors in the legendary Tour de France cycle race.

Forecasters predicted new temperatures highs in a string of countries, including Belgium, Luxembourg and the Netherlands, where the mercury is set to reach 104F (40C) for the first time on Thursday. 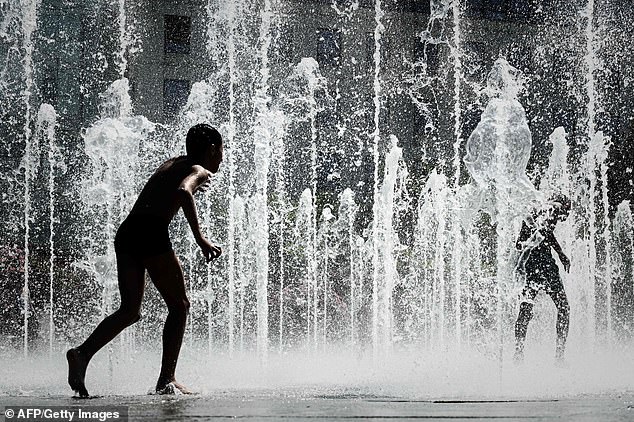 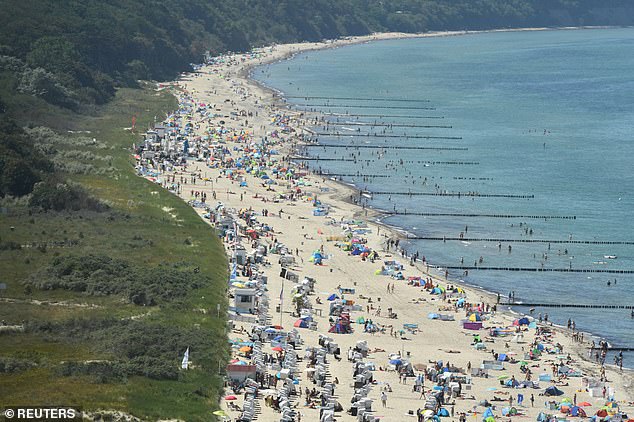 People enjoy the beach in the Baltic Sea resort of Warnemuende, near Rostock, Germany today as Western Europe prepares for the hottest summer ever 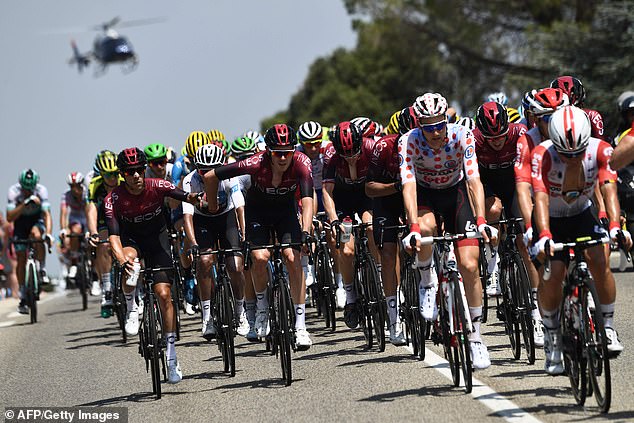 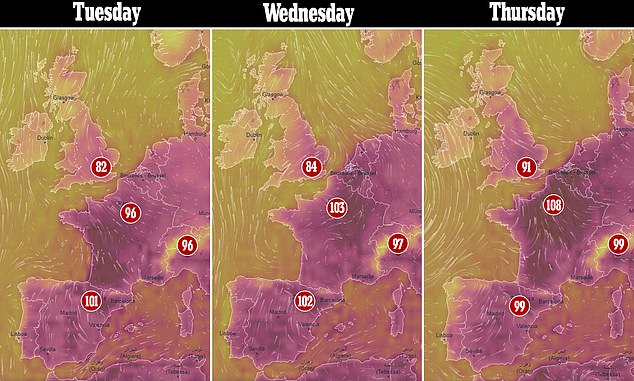 Only last month Europe struggled to cope with soaring temperatures across the continent, which caused wildfires in Spain, France and Germany.

The new record surpassed a previous all time high of 40.7C registered in August 2003, with the current heatwave set to break more historic levels in France as the week goes on.

French energy company EDF said it would temporarily shut down the two reactors at its Golftech nuclear power plant this week in the southern Tarn-et-Garonne department, in a bid to limit the heating of water used to keep reactors cool. 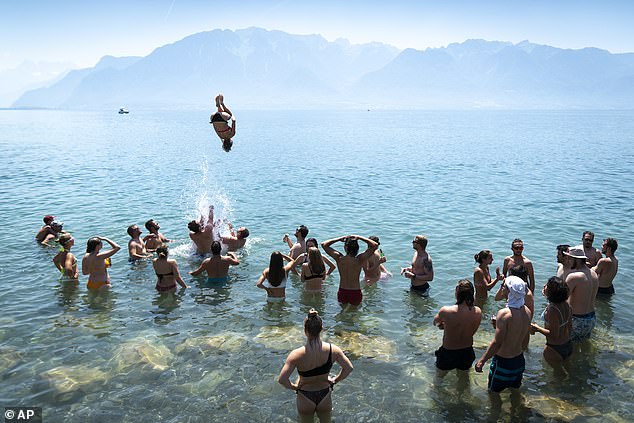 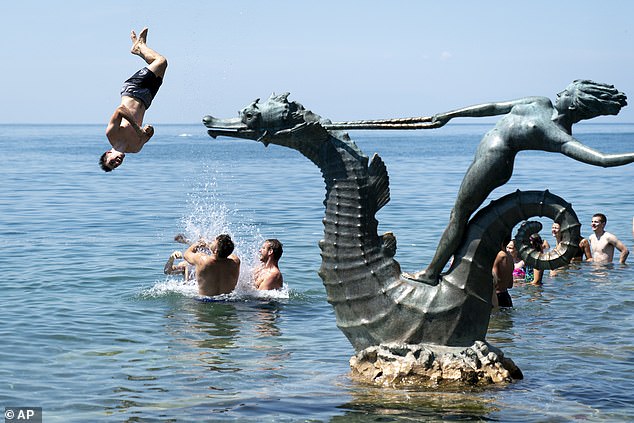 Revellers cool off in a lake in Vevey, Switzerland 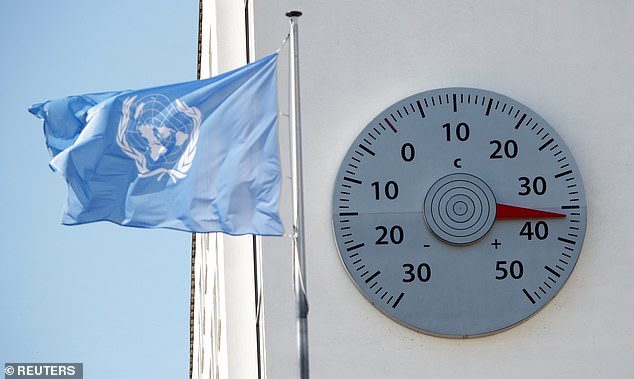 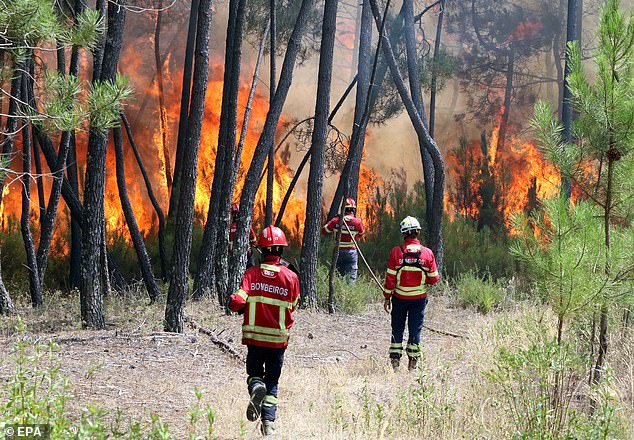 Firefighters combat a forest fire in Casais de Sao Bento, Cardigos, Macao, Portugal, which has spread due to the heat

How hot will Western Europe be this week?

Here’s the hottest temperatures European countries could reach this week.

Reactor number two will shut down on Tuesday evening and number one on Wednesday, with both due to stay shut until July 30.

France is gearing up for a surge in electricity use this week, but the national electricity board said Monday that there will be enough supplies.

And as the Tour de France reached its final week in the southeast of the country, ice foot baths and extra water points were on hand to avoid dehydration.

‘In the third week of the Tour de France, I think heat like this could make the difference,’ said Davide Bramati, head of sport for team Deceuninck, whose cyclist Julian Alaphilippe is currently leading the world-famous race.

The World Meteorological Organisation said that 2019 is on track to be among the world’s hottest years and 2015-2019 would be the hottest five-year period on record.

In the UK temperatures could exceed the all-time record of 101F (38.5C) on Thursday – asthma sufferers were warned of a ‘toxic cocktail’ of hot, humid weather and rising pollution levels. 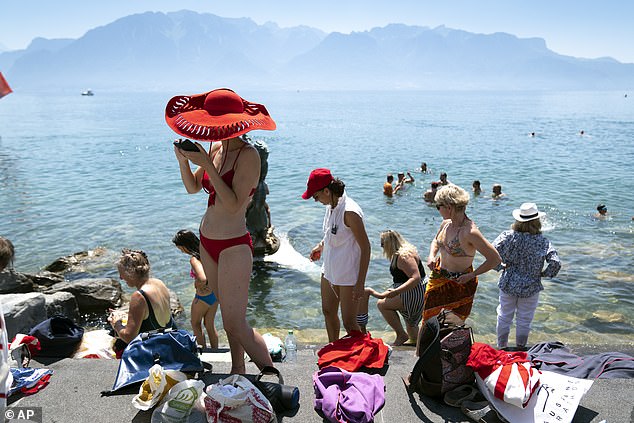 Revellers in Switzerland don swimgear for a dip in Lake Geneva 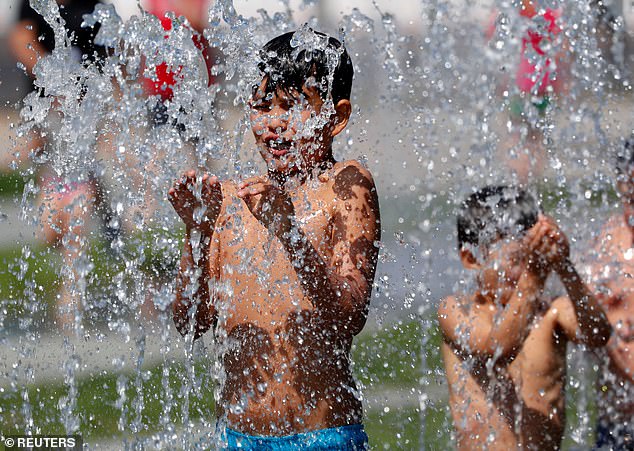 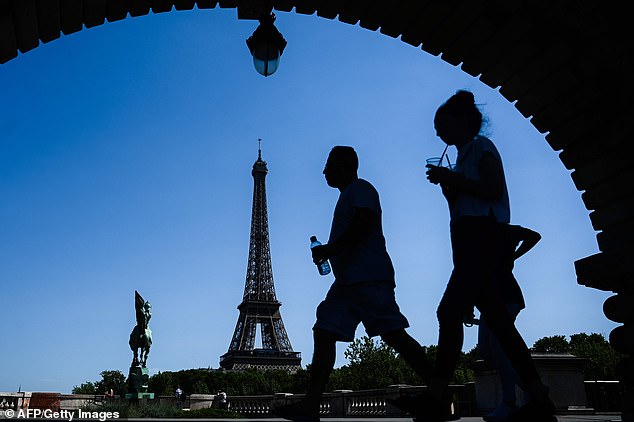 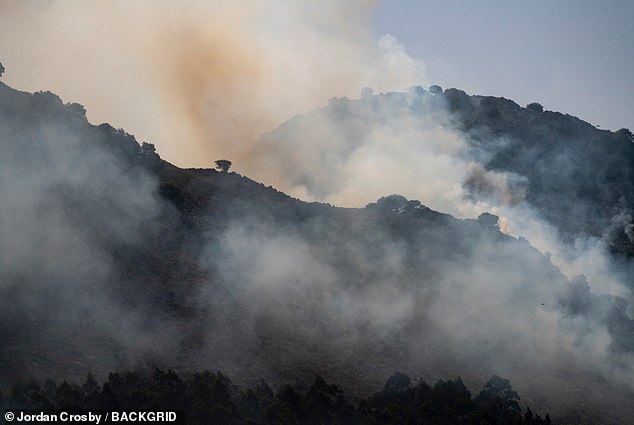 This ‘could be extremely hazardous for the 5.4 million people in the UK with asthma, triggering deadly asthma attacks,’ said Andy Whittamore, clinical leader at charity Asthma UK.

In the Netherlands – where most of the country was hit by a ‘code orange’ alert Tuesday – the government activated its ‘national heat plan’, issuing advice for hospitals, retirement homes and even obese people.

Animals were also a cause for concern.

In France, the government banned animal transportation ‘for economic reasons’ between 1pm and 6pm in areas affected by ‘orange’ and ‘red’ heat alerts. 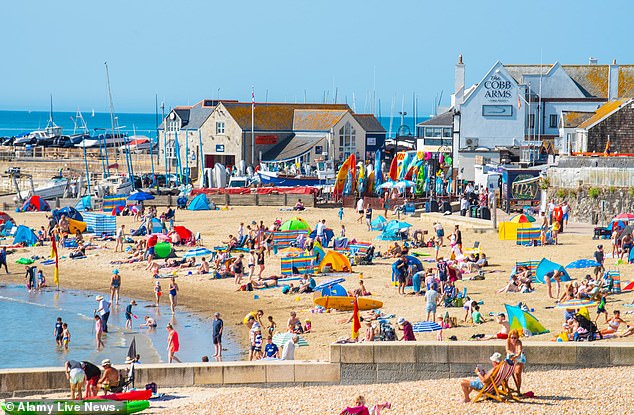 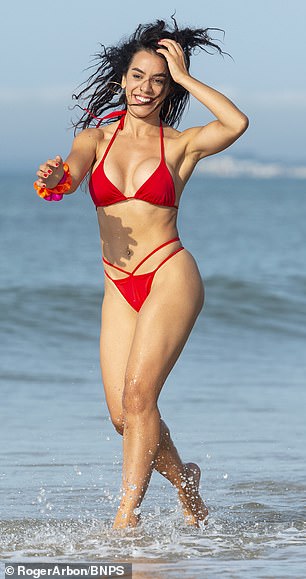 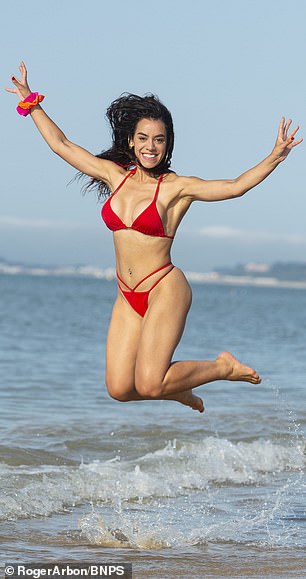 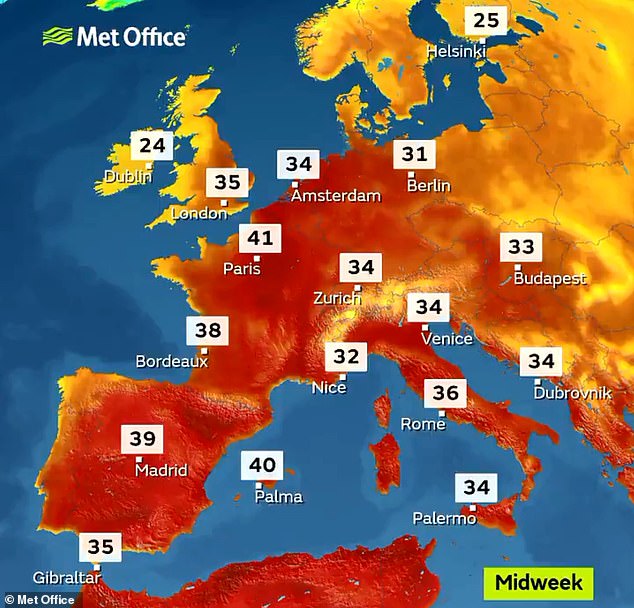 Paris and the eastern city of Lyon have also banned more heavily polluting vehicles from the city centre in a bid to keep the air clean.

The heatwave has also caused water shortages in dozens of regions across France, with a drought raising concerns for farmers producing a host of crops from potatoes to grapes.

The new heatwave in northern Europe follows a three-day temperature peak from June 26-28 in France, which was 7.2F (4C) hotter than an equally rare June heatwave would have been in 1900, the World Weather Attribution (WWA) team said this month. 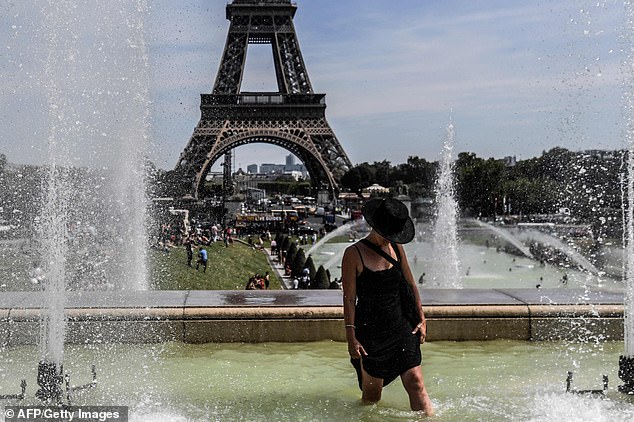 Temperatures were already topping 86F (30C) on Monday (pictured, in the Trocadero Fountains near the Eiffel Tower) in Paris, but the mercury could soar beyond 104F (40C) on Thursday and topple a record dating back to 1947 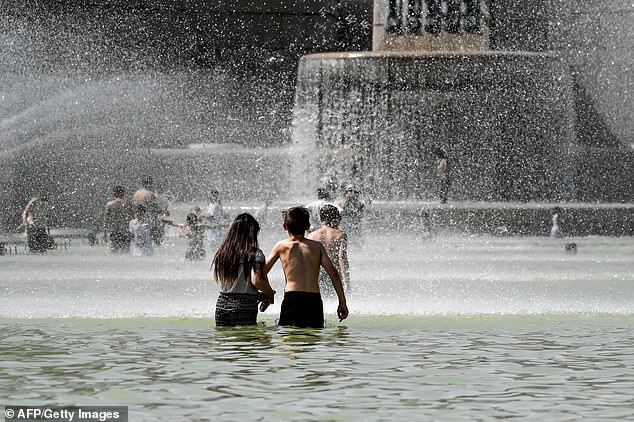 The severe heat, which forecasters say will only last a few days but will be exceptionally intense, is also expected to affect parts of Belgium, Luxembourg and the Netherlands. Pictured: People cool off at the Trocadero Fountains in Paris on Monday 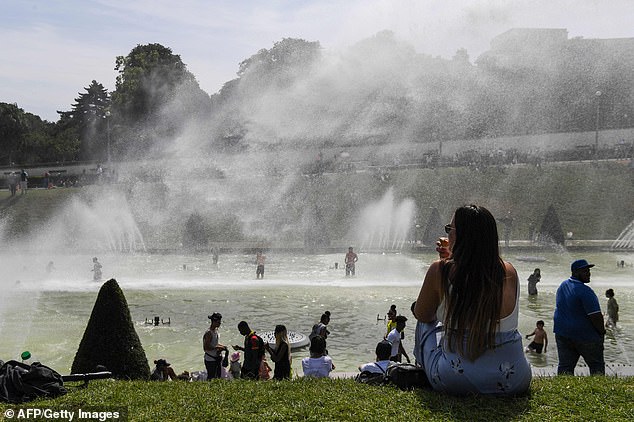 ‘It’s likely that these three countries will see temperatures at or above 40C for the first time,’ Francois Jobard, a forecaster from the French Meteo France weather office, said. Pictured: The Trocadero Fountains on Monday

One study by the Swiss Federal Institute of Technology said the deadly, weeks-long heatwave across northern Europe in 2018 would have been statistically impossible without climate change.

Swedish teenage climate activist Greta Thunberg, who has highlighted the problem of global warming through school strikes, spoke at the French parliament on Tuesday.

Some right-wing MPs have said her visit is needless, with Julien Aubert of the Republicans describing her as a ‘prophetess in shorts, a Nobel Prize for Fear’ in comments denounced by green activists.