West Ham stars Vladimir Coufal and Tomas Soucek starred once again for the Czech Republic as they upset Holland to reach the quarter-finals of Euro 2020 on Sunday.

The pair had fine seasons for David Moyes’ side last season and they’ve continued their impressive form into the European Championship this summer.

But which other non-British Premier League stars have lit up the tournament and who has flopped? Here, Sportsmail takes a look… 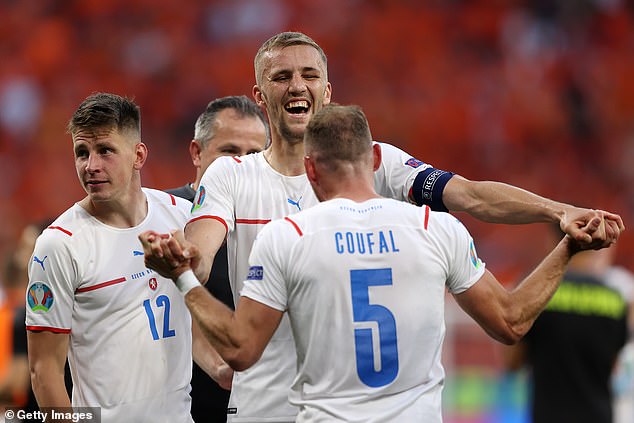 Part of a defence that conceded the most goals in the group stage, after shipping seven in three games. Underwhelming displays as Turkey failed to live up to their dark-horse tag. 4/10 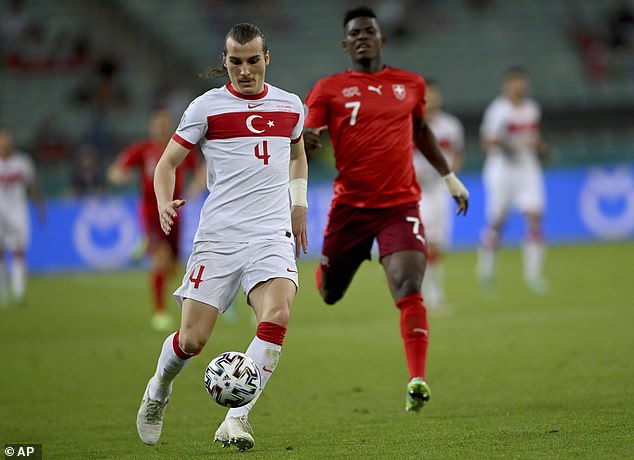 Featured in just one game out of Italy’s four so far but was part of the backline that kept Gareth Bale and Co out to keep a clean sheet against Wales. Leonardo Spinazzola has impressed in his place. 6/10

Started all of Italy’s matches with Roberto Mancini having complete faith in him to execute his gameplan. He has some of the best passing stats at Euro 2020. Does not get the credit he deserves. 7/10

The centre back started the first two group matches but was dropped for their 3-1 win over Turkey. Not the most convincing. 5/10

The Switzerland skipper has put an abysmal season at the Gunners behind him to help his homeland reach the knockout stages of Euro 2020. Not one to shy away. 6/10

Only played a bit-part role for Jurgen Klopp’s side in the 2020-21 campaign but stepped up in Switzerland’s final group game against Turkey, netting a brace. There’s no denying his talent when he’s in the mood. 7/10 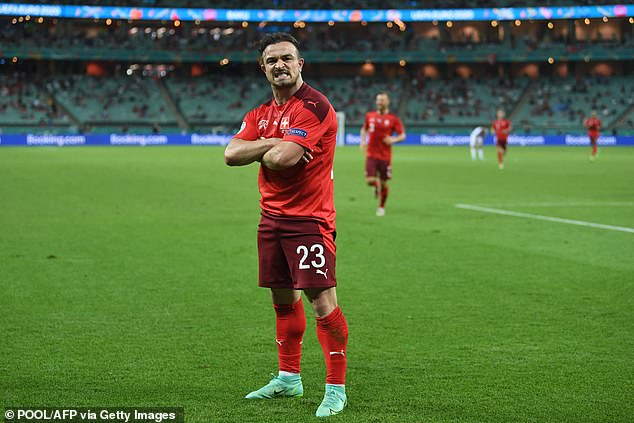 More than just a top class goalkeeper. He instills confidence in the Denmark defence and is a great leader. 7/10

Did not feature in Denmark’s 1-0 loss to Finland in their opener but has been called into the starting line-up since and formed a back three that has conceded three goals in as many games. Reliable. 6/10

Proved himself under Thomas Tuchel last season and has continued such composed displays in this year’s tournament. He capped off a brilliant display against Russia with a sensational goal that any striker would have been be proud of. 9/10 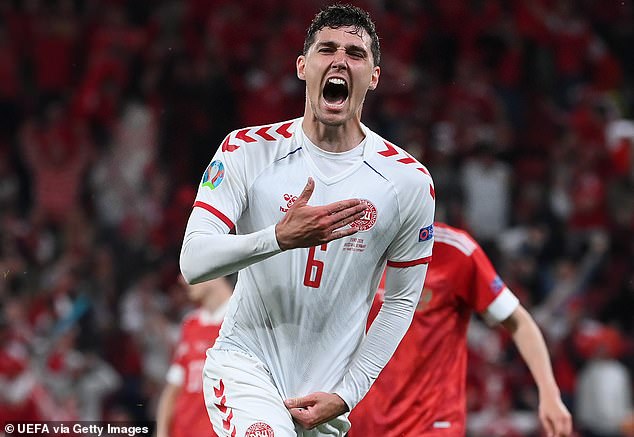 The Bees midfielder has been used as a second-half substitute throughout the tournament so far, replacing the impressive Mikkel Damsgaard. 6/10

The Spurs midfielder was one of the few positives at the north London club last season and he’s a key figure for the Danes. An experienced and intelligent player who is effective at both ends of the pitch. 7/10

The 25-year-old played a significant role in the Bees’ promotion to the Premier League last season and has been used as a substitute in Denmark’s four matches, gaining vital international experience. 6/10

Unable to leave his mark on this tournament as he failed to get on the scoresheet with Finland notching just one goal before exiting at the group stage. 5/10

Was phenomenal at the back in keeping out Cristiano Ronaldo and Co in the last-16 victory. Responded after a difficult spell with his club last season. 7/10 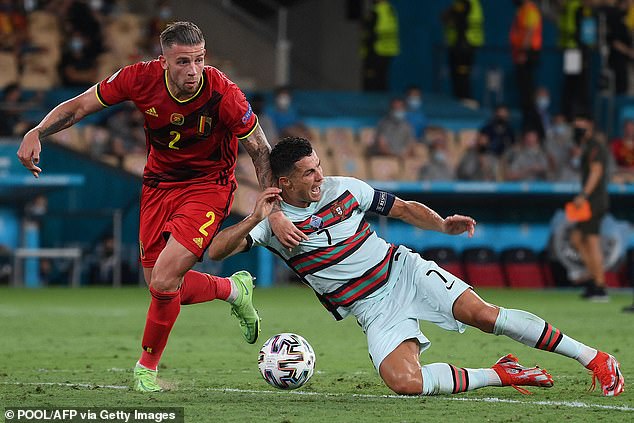 Started Belgium’s first two wins and looked comfortable but was replaced for their final group game and came on for the final seconds against Portugal. 6/10

His Euro 2020 has been cut short after sustaining a double fracture to his eye socket in Belgium’s opening game. 6/10

Always delivers whenever he needs to. A remarkable talent who is just a joy to watch. He will be big miss if ruled out of the last-eight showdown with Italy. 8/10

Following a stellar campaign for the Foxes the midfielder has continued to shine among a star-studded line-up. 7/10

Was called into action in Belgium’s final group game but was replaced a minute after Roberto Martinez’s side scored. Little impression made so far. 5/10

Austria No 1 kept one clean sheet and was the last line of a defence that impressed against Italy on Saturday and came close to causing an upset. 6/10

North Macedonia’s big-name player. Scored in their 2-1 defeat by Ukraine after netting the rebound from his saved spot-kick. No surprise he picked up a couple of bookings, though. 6/10 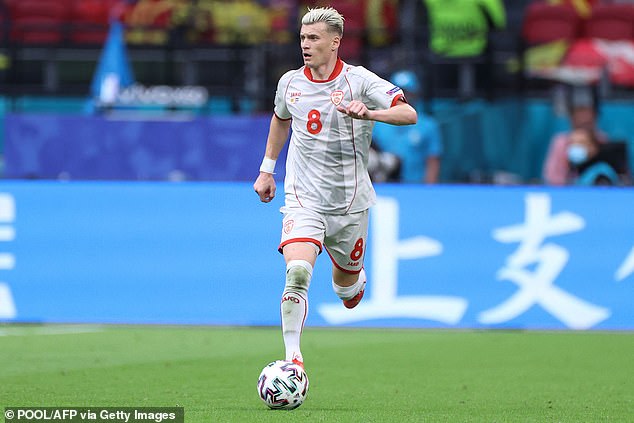 Seen his Euro 2020 game time limited but came on for around 30 minutes or so to see out their first two group wins. 6/10

Given more freedom to bomb on in Frank de Boer’s system but overshadowed by Denzel Dumfries’ impressive displays on the opposite wing. 6/10

Two goals in three games including a wonderful curling strike in the 3-2 Holland defeat. He will be integral if they want to get past Sweden. 7/10

Used further forward for Ukraine in a left midfield position rather than the left-back role at the Etihad. Solid performer in their progression to the knockout stages. 6/10

Goes under the radar, particularly alongside Real Madrid midfield maestro Luka Modric but can be trusted by Zlatko Dalic. 6/10 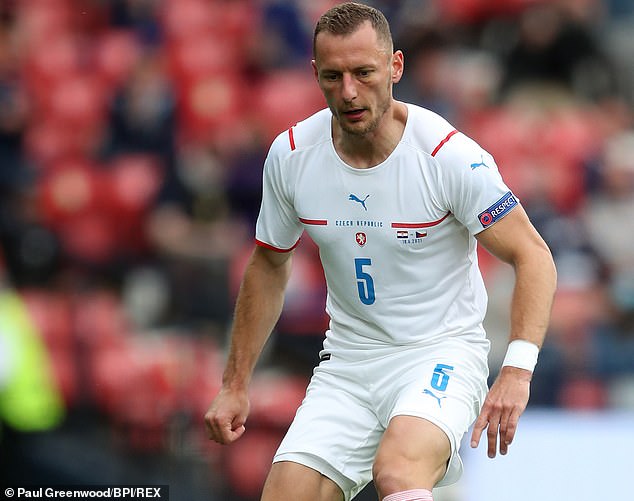 Taken his impressive form from West Ham’s promising season into this summer’s tournament. Provides a huge attacking outlet on the right flank. 7/10

Like his club team-mate the midfielder has picked up where he left off and played a huge part in the Czech’s surprise showing and run to the quarter-finals. Always a threat in the final third. 8/10 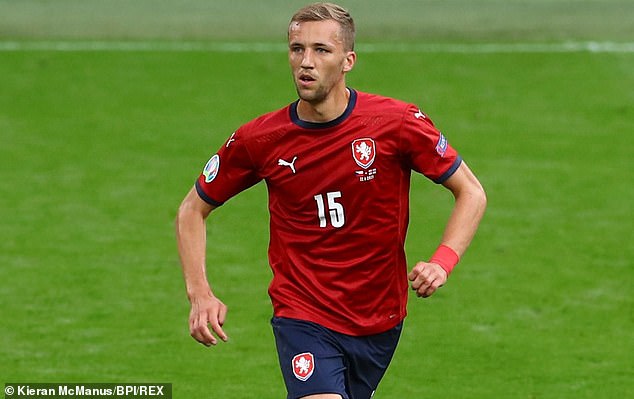 Played every minute but was part of a back three that conceded six goals in three games. Careless in possession. 4/10

Impressed at Elland Road last season and is a key player behind Robert Lewandowski but was unable to help them reach the knockout stages. 6/10

Played 85 minutes in Poland’s well-earned 1-1 draw with Spain as part of a five-man midfield. 6/10 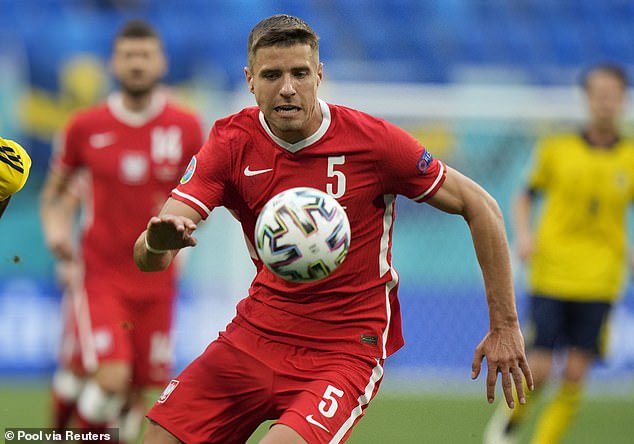 Will be remembered for his own-goal howler to get Spain on their way in the Group E decider. 2/10

Not used in Spain’s opening two games but payed 77 minutes in the 5-0 thrashing of Slovakia and was as solid as ever at right back. 6/10

Impressed in central defence alongside Pau Torres with Spain conceding just one goal so far. Scored a good header in 5-0 Slovakia rout. 7/10 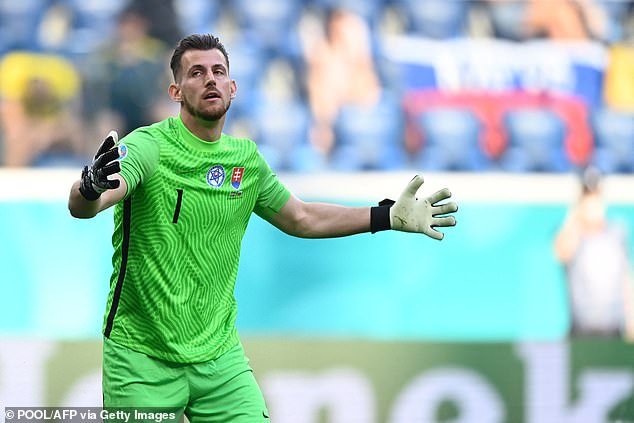 Made two second-half substitute appearances. Little opportunity to get into his rhythm and fully impact Luis Enrique’s side. 6/10

Sat in front of the back four in Sweden and Poland draws but replaced by Sergio Busqets for the final group game. 5/10

Struggled in Spain’s opener against Sweden but announced himself at Euro 2020 with a sublime finish in the 5-0 win over Slovakia. 7/10 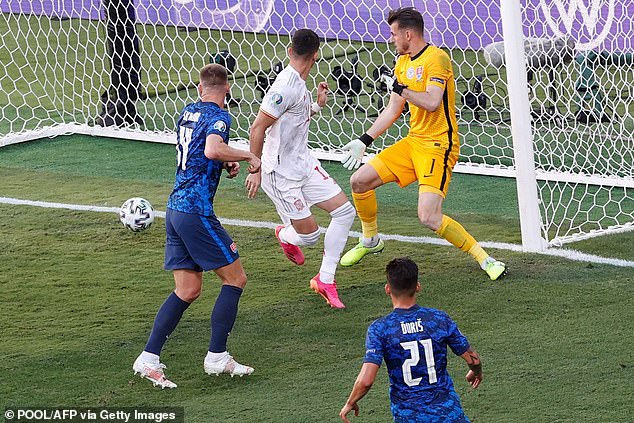 Pivotal player for his country and has been a key figure in Sweden’s good run in the tournament. 7/10

Introduced off the bench three times as Sweden looked to close games out and remain unbeaten in the group stage. 6/10

The Tottenham goalkeeper used quick thinking to set up Antoine Griezmann’s Hungary equaliser but clattered into Portugal’s Danilo to give away a penalty. 6/10

Played the full 90 minutes in 1-1 draw with Hungary but his tournament appears to be over after picking up a muscle injury seven minutes after coming on in Portugal draw. 5/10

Been one of France’s standout performers, brimming with confidence. Has more licence under Didier Deschamps and some of his passing has been exceptional. 8/10 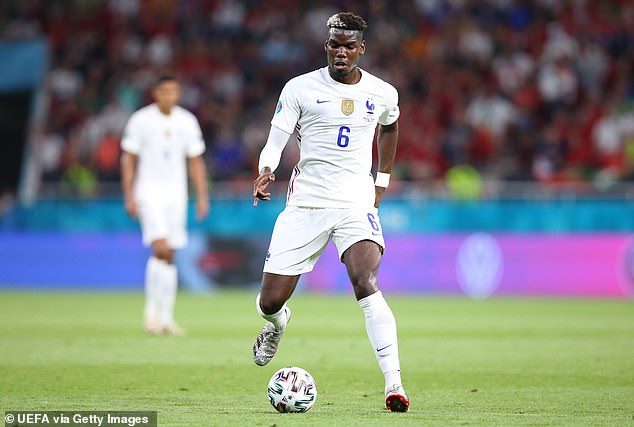 As effective as ever in the heart if the midfield. No sign of his energy levels sapping and gives the stars around him the platform to express themselves. 8/10

A key figure who’s played every minute of the tournament so far on the left side of a back three. Tough tackler but at times guilty of getting too close to attackers, as Pogba discovered. 7/10

Workmanlike alongside Toni Kroos in Germany’s central midfield area and his discipline in front of the back four enables the full backs to push forward and join attacks. 6/10

Showing why Chelsea splashed out £89million on him last summer. Has scored two in three games and was a persistent threat against Portugal. 8/10 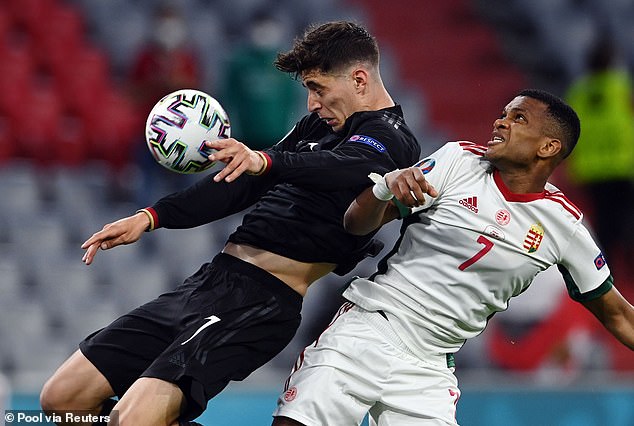 Not included in Joachim Low’s starting XIs in the group stage with Serge Gnabry, Thomas Muller and Havertz ahead of him. Little chance to recapture his RB Leipzig form. 5/10

Had a solid tournament with some important saves but conceded seven goals in four matches and arguably could have done more to stop Thorgan Hazard’s swerving strike in last-16 clash. 6/10

Endured a torrid afternoon at the hands of Germany, conceded a controversial penalty against France and was replaced by Diogo Dalot in the starting XI for the knockout match on Sunday. 4/10

Unable to have same influence on this Portugal side as he does at City but nevertheless was a commanding figure alongside Pepe. Scored an own goal in Germany defeat. 6/10

Made his Euro 2020 bow in France and Belgium games. Like at Wolves he kept things ticking over in the middle of the park and was a consistent performer. 6/10 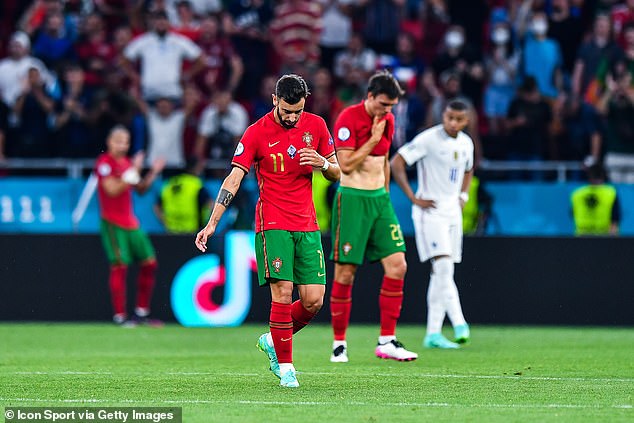 Failed to take his Manchester United form into the tournament and was dropped for the last-16 tie against Belgium. Looks like he needs a break. 4/10

Another who failed to make his mark this summer, although he did play his part in their wonderful counter-attacking goal in their 4-2 defeat by Germany. Expected  more. 5/10

Supported Cristiano Ronaldo on the left flank with his biggest impact coming against Germany where he set up the Juventus star’s opener and then notched Portugal’s second. Wasteful in Belgium last-16 defeat. 7/10

PS Hungary and Russia had no non-British Premier League stars in their respective squads.