He’s spent less than two months in the Eternal City, but Tammy Abraham has seemingly already been given a greater sense of worth than during his entire spell at Chelsea – the club he joined as an eight-year-old.

The striker might have to work a little harder on his Italian during his time with Roma, but there is no doubt about the connection he has formed with his manager, team-mates and the fans.

It’s always rare to see an Englishman move abroad, but a change of scenery can do a player the world of good – just ask his fellow Chelsea academy graduate Fikayo Tomori, now flourishing at AC Milan. 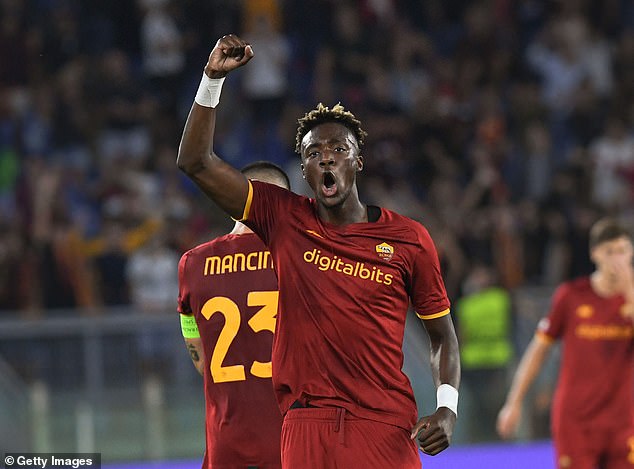 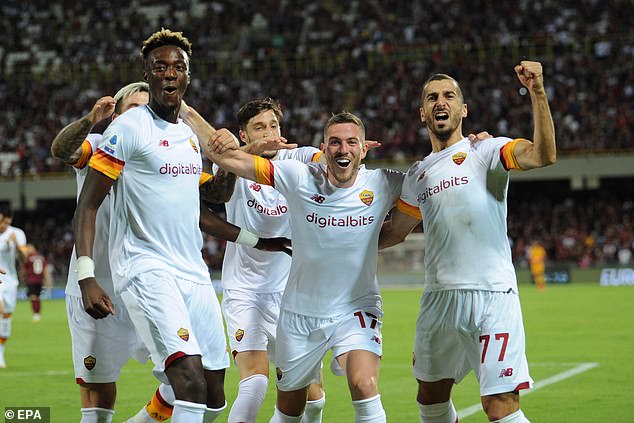 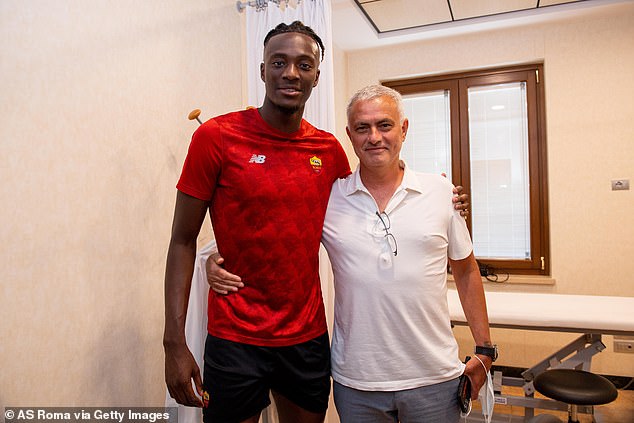 ‘There is always a small doubt for a player who is born and raised in England,’ said his new boss Jose Mourinho. ‘They don’t leave London so much and it’s not easy to adapt. But my doubt has already passed. Tammy is already perfectly integrated with the team and friends in Roma.’

The 24-year-old has been a hit – in front of goal by scoring four times, with his team-mates by providing two assists and some superb hold up play – and with the fans too.

He received a standing ovation from the Roma faithful after a brilliant debut saw him inspire a 3-1 win over Fiorentina, and just weeks later he was seen singing along to the club’s official anthem, lapping up the atmosphere ahead of kick-off against Udinese before scoring the winner in the dying minutes.

And it’s not just in the Italian capital where his talents have been recognised. Finally getting regular minutes under his belt and performing in a system tailor-made for him, Gareth Southgate has called him up to his latest England squad.

The AS Roma fans are loving him already ❤️ pic.twitter.com/4QqVtyrDmR 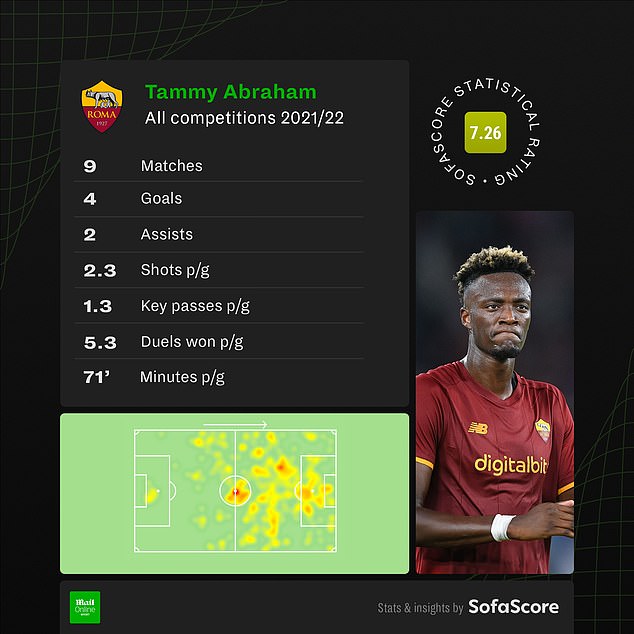 A comeback with the Three Lions is just one of Abraham’s goals on his path to redemption. Having been sidelined under Thomas Tuchel at Chelsea for much of last season, he missed out on a place at Euro 2020 and hasn’t been selected to represent his country since November 2020.

Mourinho has vowed to help Abraham in his quest to become a regular for England and turn him into ‘a monster of a forward’.

‘I am trying to create a monster of a forward for Gareth Southgate,’ he said last month. ‘Unless he doesn’t have proper eyes and still not call him up with the England national team, then I would suggest for Tammy to switch countries.

‘He deserves more caps under his name.’ 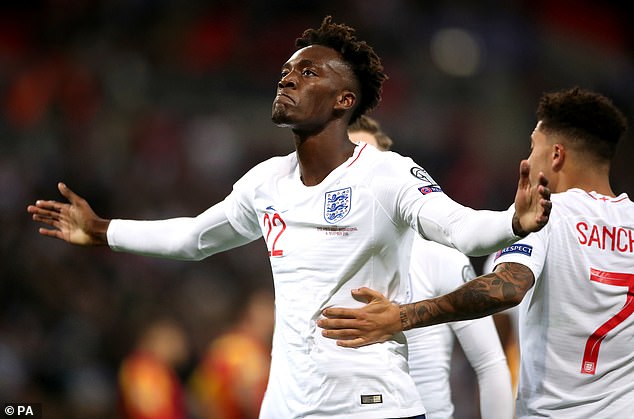 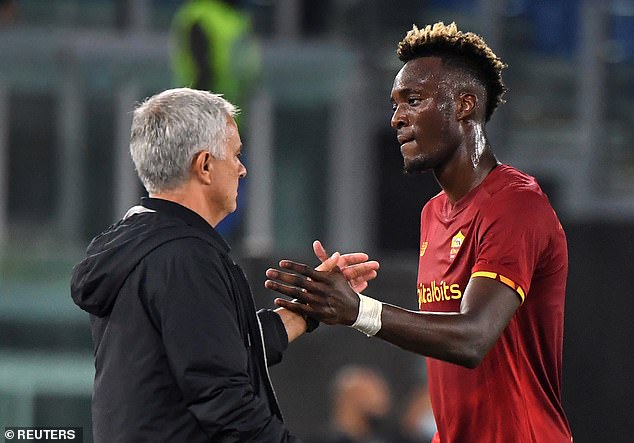 A monster might be a stretch for the minute, but he is definitely becoming a player you don’t want to come up against in Serie A.

In 10 games he has scored four – two in the top flight and two in the UEFA Conference League, enjoying 706 minutes on the pitch so far. He’s had 22 shots at goal, with a shot conversion rate of 18.2 per cent, contributing to a goal every 117.7 minutes.

While he hasn’t been as profilic as he might have liked – hitting the crossbar an incredible six times since arriving at the club – he is getting into the right positions and causing problems for the opposition, and his latest run-in with the woodwork led to team-mate Henrikh Mkhitaryan sweeping home from the rebound.

His physical and aerial presence has also been felt at his new team, winning 12 fouls, five of which have come in the final third. He’s also competed in 89 duels, coming out on top in 52 of them, or 5.3 per game – according to Sofascore. 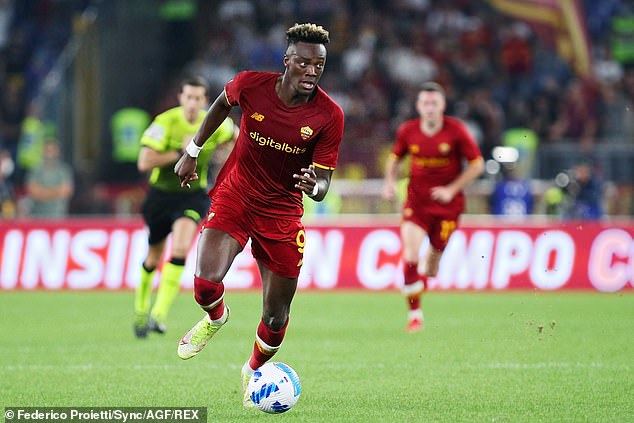 Coming in as a replacement for Edin Dzeko wasn’t the easiest lead to follow, but Roma look like they have purpose with the England international spearheading their attack after starting all seven league games since clinching his loan.

He was not appreciated in the same way at Chelsea. When the club were under transfer embargo, Frank Lampard brought him into the first team and made him the focal point of their attack, and he duly delivered with 18 goals to help fire the Blues into the top four against the odds.

Yet the following season when their transfer restrictions were lifted, the club splashed £53million on Timo Werner and life became difficult for Abraham, limiting him to cup games and sub appearances – yet he still managed to become the club’s joint-top scorer, level with the German, on 12 goals.

Tuchel, speaking last season, said Abraham had been unlucky since he took over in January this year, but dismissed his statistics pinpointing him as their top scorer and suggested the forward was not what his squad needed. 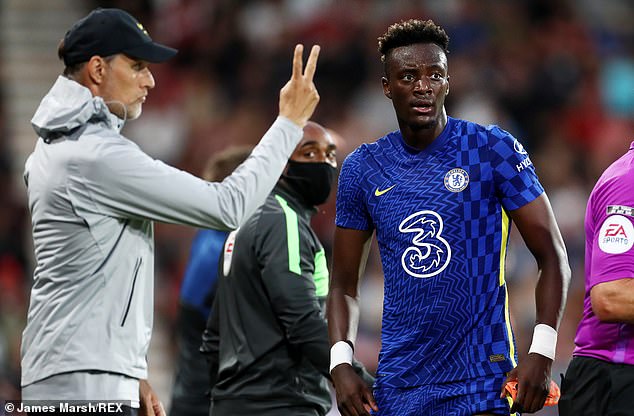 He was cast aside at Chelsea by Thomas Tuchel, who admitted the player did not fit in his team

‘He suffers a bit from the circumstances and maybe it’s not his fault, but it’s also not our fault,’ he said in April. ‘We just have to accept it, find a little bit of light at the end of the tunnel for him. I can understand, if you just look at the data, you will say, “Ok he’s the top scorer”, but if you look at the data since we are here, it will maybe tell you a different story.

‘Tammy has had a bit of a rough time. He started twice or three times and was twice substituted for tactical reasons at half-time. He could not have the impact he demands from himself and we wish from him.

‘Then he was injured and lost a bit the connection and possibility to fight for his place in the squad. The squad has played very well without him, we’ve had a lot of results without him. We demand a lot of Tammy, he demands a lot of himself. And he is using every minute to convince us that he needs to be on the pitch.’

Chelsea insisted on a €80million release clause in his £34m Roma transfer deal, suggesting they are already half convinced he will make it to the top.

But Abraham is now somewhere he belongs and feels wanted after a career that has been promising but not without its hiccups. Rome wasn’t built in a day, and neither was Tammy Abraham. Now together, his journey can finally take flight. 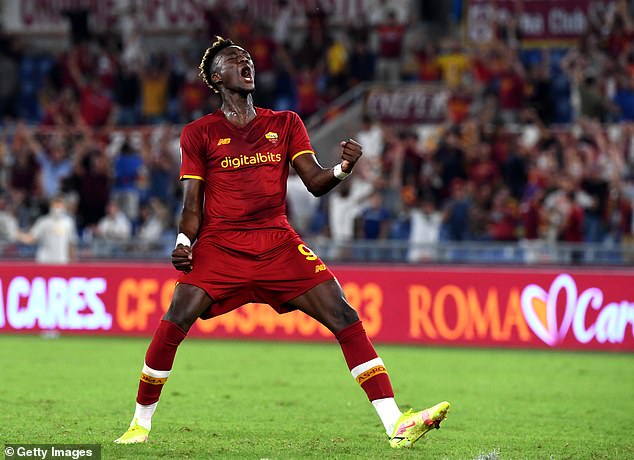