On paper, this could have been a final. Reigning champions Barcelona are top of LaLiga with five wins and 35 goals in five games. Arsenal had won nine games from nine under new boss Jonas Eidevall.

But the Gunners will be pleased this was just the opening game of the group stage.

Outplayed and outwitted in the Catalonian capital, Eidevall’s side succumbed to a 4-1 defeat and have work to do if they want to finish top of their group. 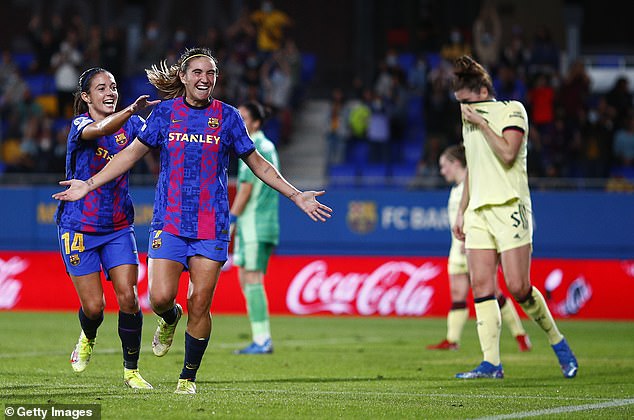 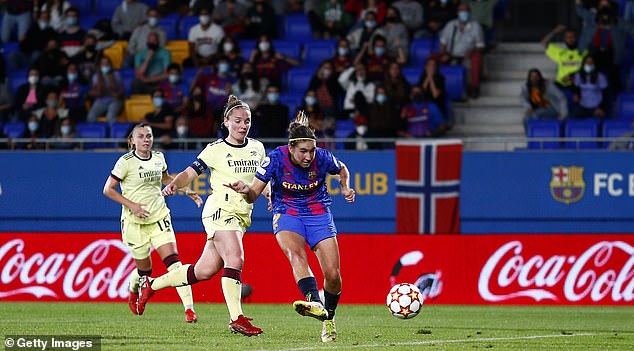 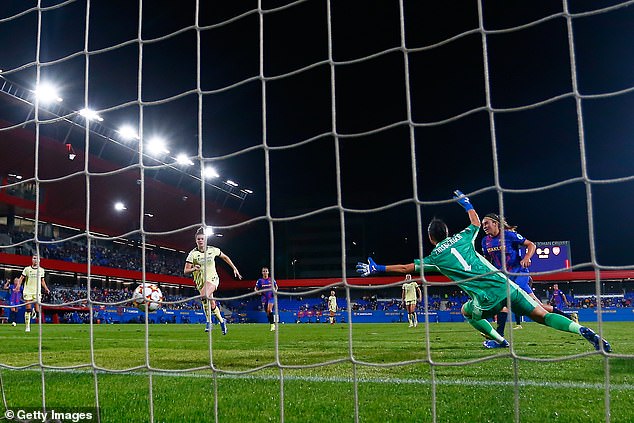 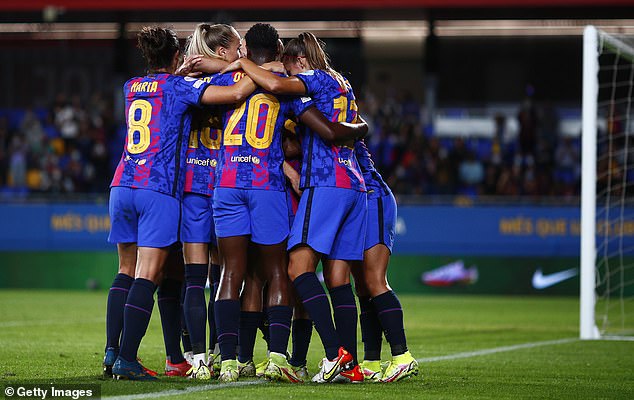 ‘Barcelona played in a way where they really denied us a lot of space and time when we won the ball,’ Eidevall conceded.

‘In the first half, on a few occasions we succeeded to play the ball out to our spaces. If you watch the second half in comparison, you can see we did that many more times. Sometimes that’s how football is, you play a team that does that better than any other opponent we have played so far this year.

‘That will prepare us for the future and we will learn from it. We will need to raise our standards and hopefully we can do better.’

Barca thrashed Chelsea 4-0 in last year’s final and are the favourites to win this season’s competition.

They were on the front foot from the first whistle and could have taken the lead in the fifth minute when Mariona Caldentay forced Gunners’ goalkeeper Manuela Zinsberger into a fine save to her right.

Asisat Oshoala, who played for Arsenal from 2016-2017, fired wide in the 10th minute before Zinsberger made another good stop to deny Marta Torrejon from a corner.

Arsenal held out until the 30th minute before Barca’s constant pressure finally resulted in the opening goal. Zinsberger could only push Oshoala’s shot out to Caldentey, who reacted quicker than Kim Little to pounce on the ball and fire into the bottom right corner.

The hosts doubled their lead shortly before half-time when Oshoala beat the offside trap to pick out Alexia Putellas, who slotted a first-time finish into the roof of the net.

Arsenal needed to keep things tight at the beginning of the second half but conceded almost straight after the whistle. Oshoala finally got her goal when she raced onto Caldentey’s through ball to calmly slot past Zinsberger.

Eidevall threw on Tobin Heath, Nikita Parris and Caitlin Foord in the 55th minute and the trio made an impact as Arsenal started to ask more questions of their opponents. 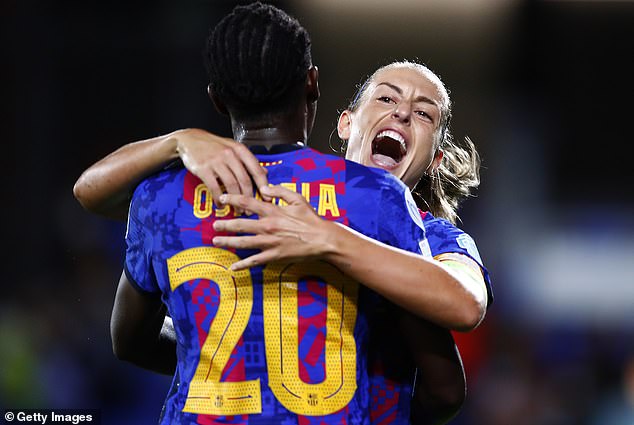 It only took 11 minutes for Barca to get their second goal, which came through Alexia Putellas 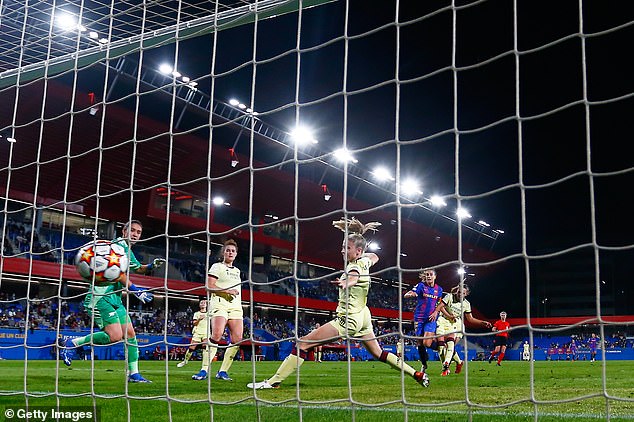 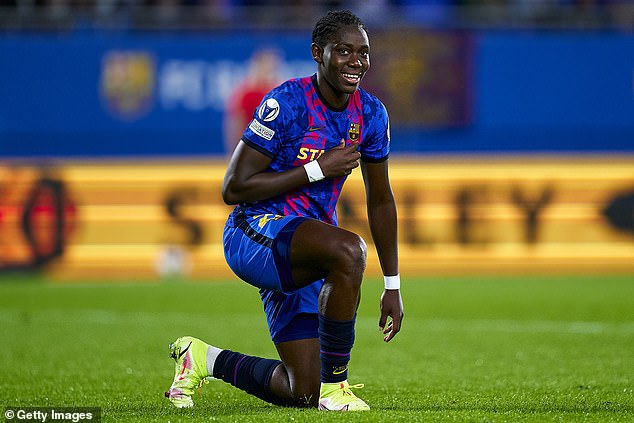 Then, just minutes after the restart, Barcelona got their third through Asisat Oshoala 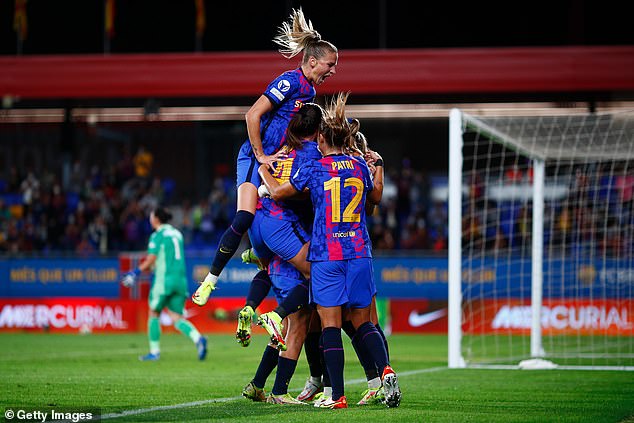 Parris almost pulled a goal back when Foord laid the ball off to her on the edge of the box but her goal-bound shot was cleared off the line by Maria Leon.

A goal did come for the Gunners shortly after, however, when Frida Maanum met Heath’s teasing free-kick at the back post with the midfielder managing the nudge the ball over the line with the side of her leg.

As Arsenal pushed forward, they left spaces at the back and they were made to pay when Patri Guijarro picked out Lieke Martens, who outpaced Jen Beattie before chipping an on-rushing Zinsberger.

Putellas missed a chance to make it 5-1 when her 93rd minute penalty was saved by Zinsberger after Jordan Nobbs had been penalised for a foul on the Barca forward. 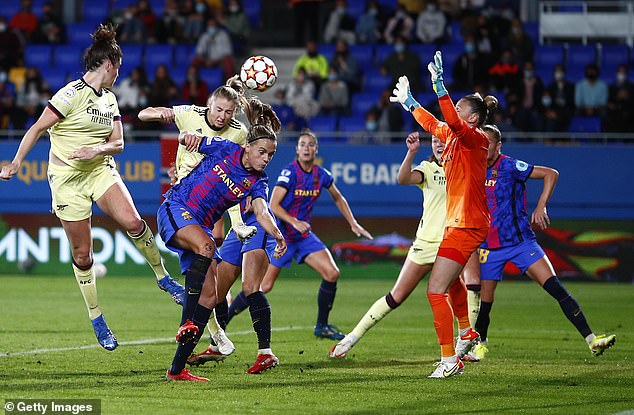 However, Barcelona restored their three-goal lead through substitute Lieke Martens 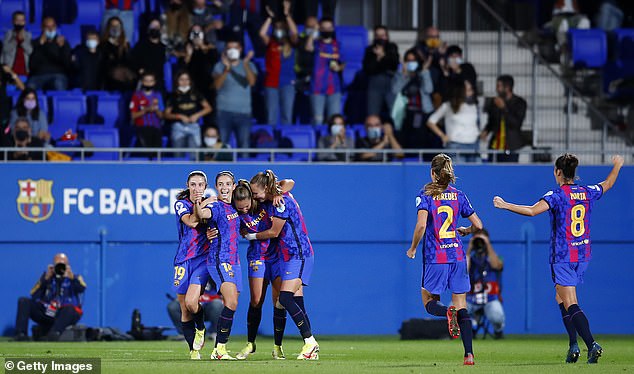 ‘We have a team that never gives up,’ Eidevall said. ‘It was a really, really tough game. I can probably do things better in preparing the team to find those solutions quicker than they did today. You see the energy that the players played with in the second half.

‘It was tough on all levels, both with the way the game looked and the result we had but I’m really proud that we did our best the whole game. The standards in how good we need to be on the ball in order to play out from their very intense counter pressure, we can learn from that and we can bring that into our training.’

Arsenal face Hoffenheim at home next Thursday before travelling to HB Koge on November 10.

They next face Barca on December 9 in a game which could decide who tops the Group C, providing the Gunners can beat their German and Danish opponents.