It’s tricky to pinpoint the precise moment Parkhead decided it very much liked the look of Kyogo Furuhashi.

Was it the cutely taken first goal? The simple second? Or perhaps the sprint and sliding tackle on Ryan Sweeney midway through the opening period that drew an almighty ovation?

What’s certain is that by the time Furuhashi nimbly completed his hat-trick in the 68th minute, this place was smitten. 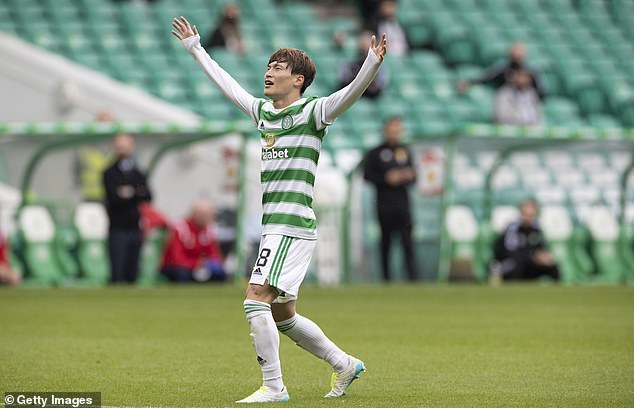 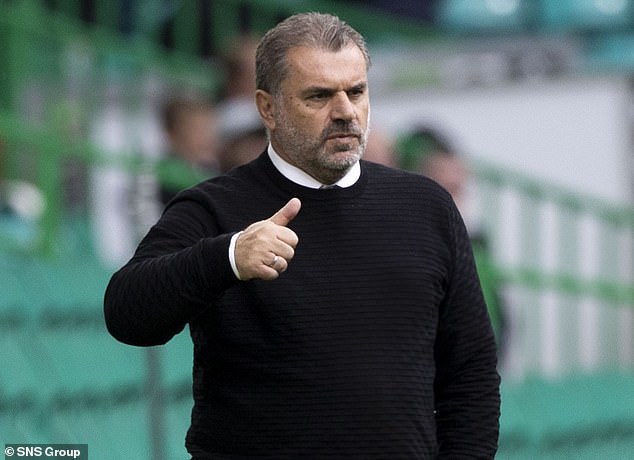 Immediately replaced by Odsonne Edouard, the £4.5 million Japanese forward exited sporting a beaming smile and with ears crackling at the buzz of excitement generated by his mightily impressive home debut.

He could have another goal. Another couple, in fact. But the intelligent movement, slick skill and sheer desire of the recent arrival from Kobe Vissel provided an exhilarating centre-point to the best day of Ange Postecoglou’s nascent tenure.

The afternoon actually began with a couple of hundred fans braving thunderous downpours to protest against the club’s board in front of the stadium.

Postecoglou was given a warm personal welcome, though. And come full-time, the mood among the 24,500 crowd was uniformly upbeat.

Clearly, there will be many tougher challenges than against a Dundee team still getting to grips with Premiership football. But here was clear evidence of the kind of football Postecoglou is trying to introduce.

In the wake of an opening day defeat to Hearts, the Australian spoke about creating ‘hope and belief’ as fans returned to Celtic Park. This wasn’t a bad way to begin. 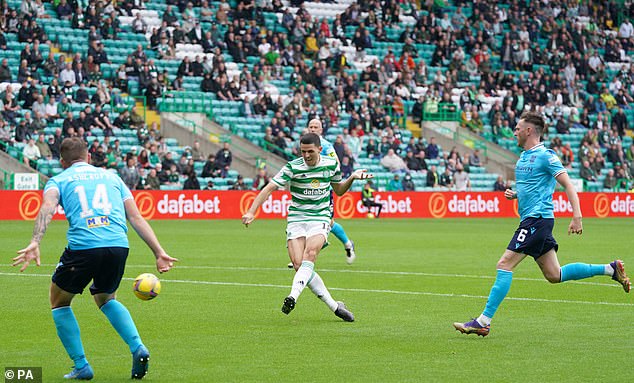 Brighton target Edouard scored a late penalty, yet life after the French striker may not be so daunting if Furuhashi can maintain this level.

More intriguing is the case of Ryan Christie. He was superb here, recording three assists. His contract may expire in January but the Scotland man did not look anything like a player with his mind elsewhere. You could see why Postecoglou isn’t giving up on keeping him for a longer period.

There was also a first clean sheet in five games of the new regime. Mark that as a box ticked for an underworked Joe Hart.

Ultimately, though, this was Furuhashi’s game. He answered any questions about how he might cope with the rough and tumble of Scottish football.

Signing smartly is the obvious foundation stone of Postecoglou’s rebuild. More has to be done on that front but, with Rangers losing their Invincible status on Saturday, you sense all associated with Celtic ended the weekend feeling a lot better about themselves than they did at the start.

For Dundee, this was a brutal reminder about the levels within the Premiership after last week’s point against St Mirren. If there was any comfort to be found, it lay in the knowledge they will not face this brand of fluent football every week. 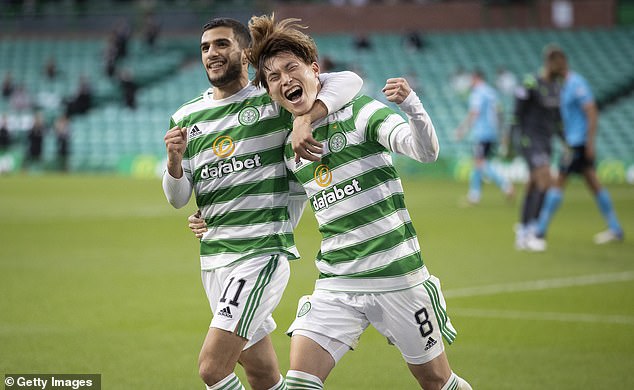 With Ismaila Soro starting on the bench, Callum McGregor was the deepest lying of Celtic’s three midfielders. The captain’s absolute assurance on the ball provided a platform for those in front of him to thrive.

Celtic could have been in front after ten minutes. Furuhashi worked a delightful interchange with Tom Rogic but stroked his shot wide of target from the centre of the penalty area.

It was a miss, alright. But one rapidly remedied. Celtic’s grip on the game was vice-like.

Furuhashi won the ball back just outside the Dundee area, leading to a Charlie Adam foul on Christie. The Scotland man flighted a 20-yard free-kick just too high.

An inevitable opening goal arrived on 20 minutes and David Turnbull was central to its creative merits.

It was 2-0 six minutes later. This time, Christie provided a sparkling assist. The 26-year-old utterly bamboozled Christie Elliot by skipping around him on Celtic’s left, opening space to sweep a cross into the six-yard area. Furuhashi met it with a sliding finish. 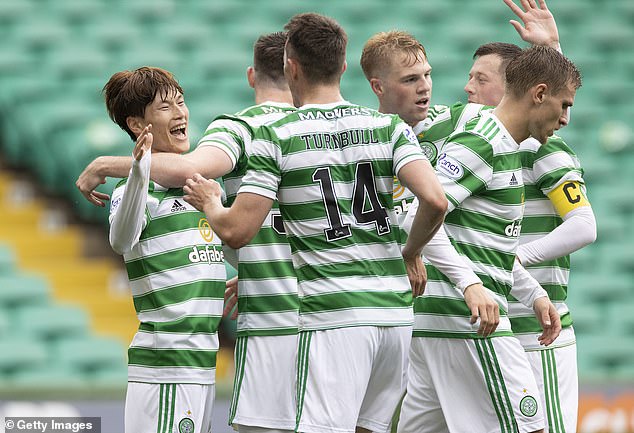 Dundee were gasping for air now. Celtic had 13 shots and 74 per cent per cent possession during the opening period. Threat came from numerous points.

Turnbull saw an ambitious, curling attempt pushed wide by Legzdins before the English goalkeeper clung onto one from Stephen Welsh. The young Scot had been preferred to Nir Bitton as Carl Starfelt’s central defensive partner.

The visitors made it to the break without taking on more water but not much beyond it. Four minutes after the restart, Turnbull dispatched another of his searching, lofted passes. Elliot started as favourite to deal with it but somehow found himself outmanoeuvred by Christie. A simple cut-back was coolly finished by Rogic.

That weak bit of defending was Elliot’s last involvement in a difficult afternoon. Replaced by Finlay Robertson, the ex-Partick Thistle man will hope it’s a while before he bumps into Christie again.

Celtic’s own backline wasn’t absolutely flawless. One bit of hesitancy allowed Cillian Sheridan to cross low for a Paul McGowan shot turned behind by Hart.

McGowan then provided a corner that Jordan McGhee headed over the top, but those flickers of uncertainty were soon extinguished. 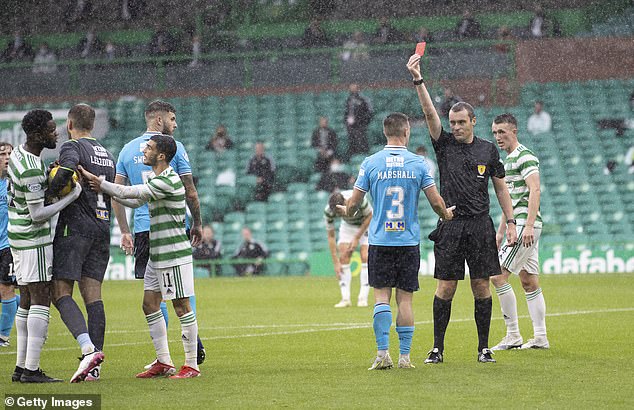 Furuhashi should have had his hat-trick on 64 minutes when he pounced on a scuffed strike from Rogic. Under pressure from a defender, he could only scoop wide.

The 26-year-old shook his head in frustration but the crowning glory of his Parkhead bow was only briefly delayed.

Welsh carried the ball into Dundee territory and laid off for Christie. His disguised pass was exquisitely weighted for Furuhashi’s smart run. A dinked finish did the rest.

Edouard saw an angled attempt tipped wide by Legzdins before a fifth goal arrived. Substitute James Forrest delivered from the left, with Anthony Ralston finding himself in front of goal in his role as an inverted full-back. A nice first touch allowed him to reverse past Legzdins off his left foot.

The final sheen was added on 89 minutes. Abada was tugged down inside by Marshall, earning the full-back a red card from referee Euan Anderson.

Edouard pulled rank to take the penalty and dispatched it Hughton into the net. A parting gift? Perhaps. After this game, however, the collective future for Celtic looks a little bit brighter.

Matteo Trentin wins stage 17 of the Tour de France as...