Primoz Roglic stamped his authority on the Tour de France as defending champion Egan Bernal slipped back on a punishing stage 13 to the summit on Puy Mary.

After Dani Martinez claimed his first career Tour stage win in something of a slow-motion sprint with Lennard Kamna from a breakaway, gradients nearing 20 per cent carved up the general classification when the main contenders arrived a little over six minutes later.

In what is becoming a common pattern in this Tour, Roglic followed an attack from his close friend and fellow Slovenian Tadej Pogacar late on the 191.5km stage from Chatel-Guyon, and together they put 38 seconds into Bernal. 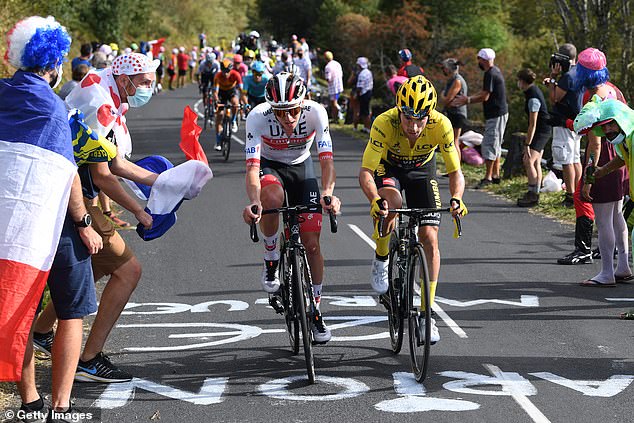 The result is that Jumbo-Visma’s Roglic is looking ever more comfortable in yellow, while Pogacar climbs above Bernal into second place, now 44 seconds back and surely ruing the 81 seconds lost in crosswinds on stage seven.

‘It was a really nice day, I’m super happy,’ Roglic said. ‘As long as you can gain time every second is to your advantage.

‘I’m really happy at the end, we were two Slovenians at the top. It’s not just me, I have the jersey, but our whole team – everyone needs to do his job – and all together so far we’re doing a really nice race.’

Though Roglic has looked the stronger rider throughout the Tour so far, this was the first time he had definitively dropped Bernal – until now what had been a 21-second gap between them was all derived from bonus seconds.

Now the Colombian’s deficit stands at 59 seconds and the 23-year-old had to admit he simply could not keep up as he handed the best young rider’s jersey over to Pogacar.

‘I did my best, but the others were stronger than I was,’ Bernal said. ‘I couldn’t do more than this. I felt very good all day.

‘I looked at my numbers from today’s stage and they were almost my best ever. The rest simply went faster. We have to see what will happen in the coming days.’ 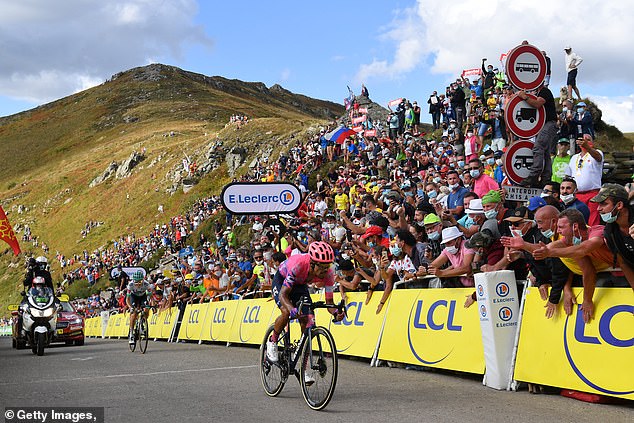 When the day began, the top 10 was the closest it had been at this stage of any Tour since 1947, but final climb changed all that.

French duo Guillaume Martin and Romain Bardet began the day third and fourth respectively, but cracked on the roads of the Massif Central, dropping out of the top 10.

Instead it is the Colombians who are massing behind the Slovenian duo out front, with Rigoberto Uran, Nairo Quintana and Miguel Angel Lopez making up the rest of the top six.

Adam Yates sits seventh, one minute and 42 seconds down, having doggedly stuck with the main group of contenders as long as he could despite saying earlier this week he was seeking opportunities to lose time and so gain freedom to seek stage wins.

Stage honours went to another Colombian as Martinez beat Kamna to the line in a slow-motion sprint, the two riders looking utterly exhausted after a day that included seven categorised climbs.

The last of them was the most brutal, and was enough to break the ambitions of Kamna’s Bora-Hansgrohe team-mate Max Schachmann, who had set off solo as the race moved into the final 20km.

Schachmann – looking strong less than a month after he was hit by a car during Il Lombardia – was caught with 1.6km to go to leave Martinez and Kamna to slug it out, and they looked like two punch-drunk boxers as they approached the finale.

Martinez entered the Tour as an outside contender given he won the Criterium du Dauphine last month after Roglic and Bernal had dropped out, but a stage two crash hit those ambitions early on.

‘I am very, very happy,’ the EF Education First rider said. ‘It’s been a tough Tour for me after the crash, I was struggling to find my best form, but I’ve been feeling really good and psychologically to win a stage feels really amazing.’

Chris Froome is set to leave Team Ineos at the end...

Arsenal ‘make contact with PSG over Kehrer’ as Arteta seeks to bolster...