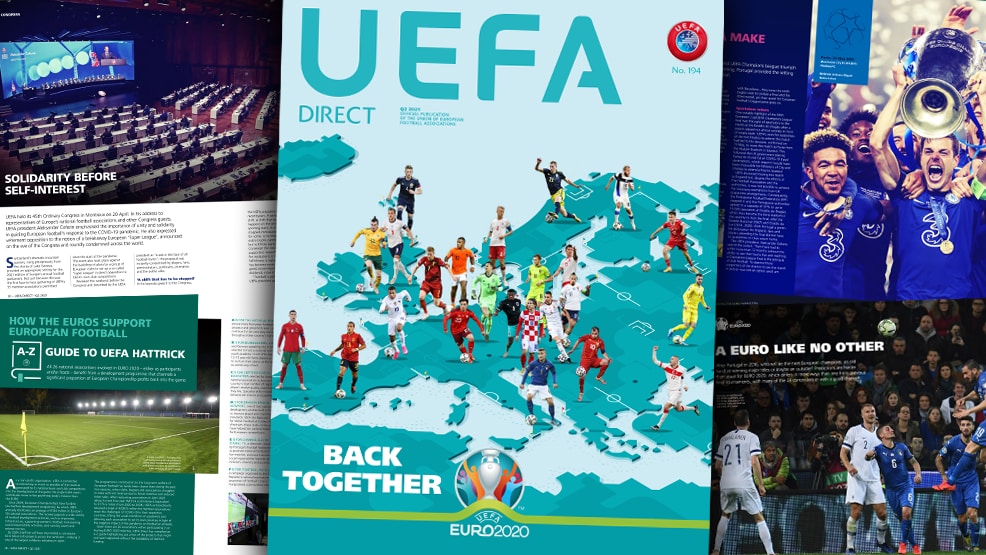 Introducing a bumper 96-page edition of UEFAâ€™s interactive magazine, in which President Aleksander ÄŒeferin joins football fans everywhere in heralding the arrival of UEFA EURO 2020 after a yearâ€™s delay.

Alongside our coverage of the EURO, thereâ€™s plenty more packed into UEFA Direct giving readers a full overview of how European footballâ€™s governing body and its 55 member associations are running, developing and supporting the beautiful game.

UEFA President editorial: The wait is over

â€œIt is time to revel in a month-long festival of football that will further enrich the annals of the gameâ€™s history,â€ Mr ÄŒeferin writes. â€œFinally, the wider football community can come together and rejoice in the sport that we love and cherish.â€

â€œIt has been the longest ever wait between one European Championship and the next,â€ the UEFA President adds. â€œNow that the waiting is over, we should savour the moment more than ever before.â€

360 degree overview of the biggest international sporting event to take place since the start of the pandemic:

â€¢ A tournament like no other: UEFA Events SA CEO Martin Kallen reflects on his toughest challenge

â€¢ Whoâ€™ll win the EURO?: The lowdown on the EURO hopefuls

â€¢ Planning a sustainable future: How UEFA is helping its 55 member associations survive the new realities caused by the pandemic

â€¢ The path to glory: Looking back at the spring finals in UEFAâ€™s club competitions

â€¢ Smoothing the pathway: Belgium and Italy adopt a novel approach to the transition from playing to coaching

July 23, 2021
As Manchester United piled more and more second-half pressure onto a flagging Villarreal defence, Ole Gunnar Solskjaer would have loved to have introduced...

Chelsea ‘have held talks with Robert Lewandowski’s agent over a summer...

So much for a friendly! Lille have two players SENT OFF...