‘Needs sacking, disgraceful’: Man City fans fume at Roberto Martinez for starting Kevin De Bruyne in Belgium’s defeat by Italy despite him carrying an ankle ligament injury… after the midfielder said it was a ‘miracle’ he played

Manchester City fans have slammed Belgium boss Roberto Martinez, with some calling for him to be sacked after playing Kevin De Bruyne in their defeat by Italy.

The midfielder suffered a tear to his ankle ligament in the last 16 tie with Portugal but was still named in the starting line-up and played the full 90 minutes of the quarter-final match on Friday.

De Bruyne, who was a doubt going into the tournament after fracturing his nose and eye socket in the Champions League final, admitted it was a ‘miracle’ he played against Italy. 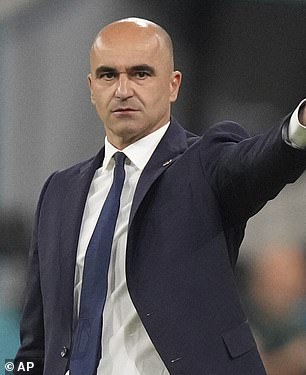 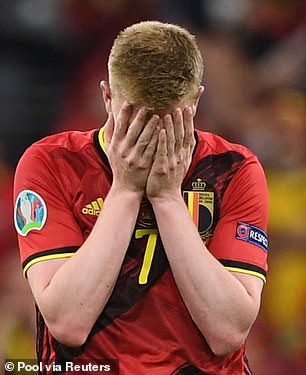 The midfielder thanked Belgium’s medical staff for preparing him for the match, telling UEFA: ‘For me personally it has been four or five weird weeks.

‘But I especially want to thank the medical staff. It was a miracle that I played today because there was definitely damage to my ankle. A tear in my ligaments.

‘But I felt responsibility to play for my country today. Too bad I couldn’t do more.’

But City fans were left unimpressed by the midfielder’s partcipation in the game. 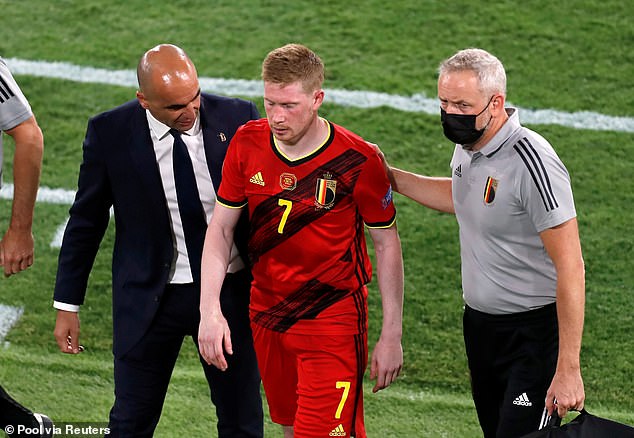 Replying to a tweet about Martinez, one fan wrote: ‘Needs sacking… playing Kevin De Bruyne whilst having a serious injury last night… Disgraceful… Belgium did the same with Kompany years ago.

Another added: ‘I knew I hated Martinez for good reason’.

One observed suggetsed it was a ‘reckless’ decision to keep the midfielder on ffor the full 90 minutes.

Despite not being 100 per cent for the tournament and not having his best game against Italy, the midfielder still managed three assists and a goal in Belgium’s five games.

And City fans were also quick to point out how influential he was for Martinez’s side, despite carrying two injuries.

One tweeted: ‘Carried an injury into the tournament and missed half of the group stage. Played one half of the Round of 16 and got injured again. Played 90 minutes of the quarter-final with a tear in his ligament.

‘Kevin De Bruyne is the best midfielder in the world.’

Another wrote: ‘Kevin De Bruyne had ankle ligament damage and is still recovering from facial injuries sustained in the Champions League final.

‘The fact that this platform will still find a way to blame him for Belgium going out shows how much people prioritise agenda over the truth.’

A Belgium supporter praised the 30-year-old for playing through the pain, writing: ‘Wauw, @DeBruyneKev playing with torn ligaments, giving his all for Belgium during the full 90 minutes! Thank you Kevin for giving it your all despite the injuries! (sic)’ 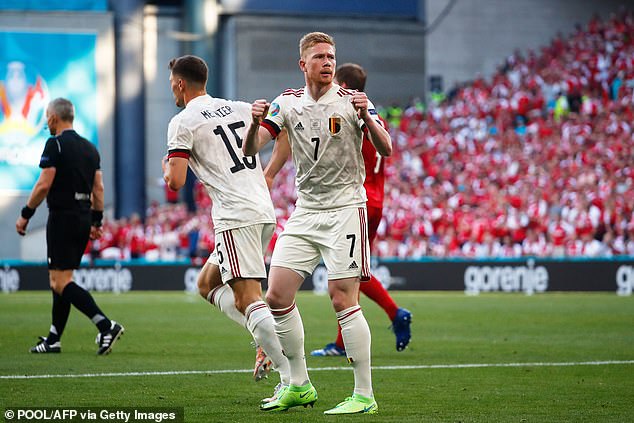 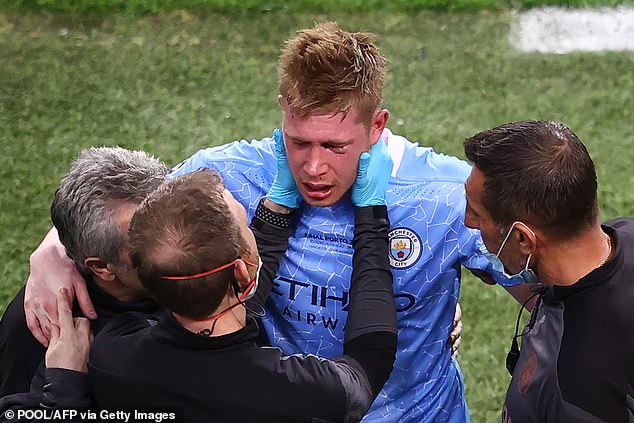 Martinez avoided questions on his future as Belgium boss, insisting the defeat against Italy was still ‘too raw’ to make any decisions.

The manager took the Belgium job in August 2016, succeeding Marc Wilmots after the Euros that year in France.

The Spaniard signed a contract in May last year to take him through until after the 2022 World Cup in Qatar.

England player Tyrone Mings lives it up in Ibiza as he...

July 23, 2021
He was part of the England squad that made history with their Euro 2020 success. So Tyrone Mings was treating herself to a well-earned...

UEFA ‘decides to SCRAP away goals in European competitions’ after 56...