He recently celebrated returning home from the Euro 2020 tournament by partying at a boozy bash with some of his friends.

But England football hero Jordan Pickford was enjoying a more relaxed break on Wednesday as he spent time with his wife Megan, 25, and son Arlo, two, on a tropical getaway.

Taking to Instagram, the Everton goalkeeper shared a sweet image kissing his son on the cheek while they took a dip in a pool. 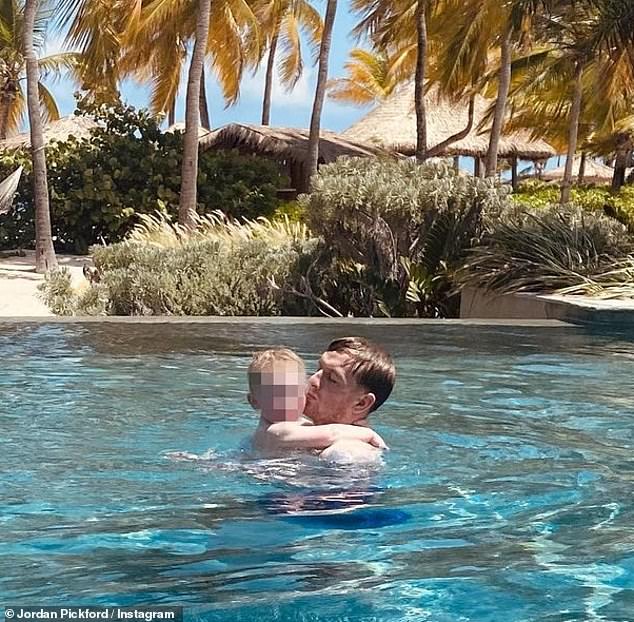 ‘Quick break away’: England football hero Jordan Pickford offered a glimpse into his idyllic tropical getaway with wife Megan and their son Arlo in a picture on Wednesday

Jordan could be seen holding Arlo in his arms as he waded through the water.

Captioning the sweet picture, Jordan made a reference to the party he was filmed attending after returning home where he sung Cher’s Believe while riding on a friend’s shoulders, and he wrote: ‘Quick break away with Megs and Arlo… be back in the tent in no time.’

It wasn’t just Jordan offering a glimpse of their holiday though, with his wife Megan also having shared a couple of snaps during their time away.

Megan took to her Instagram stories on Thursday morning to share two family snaps with her 85,200 followers. 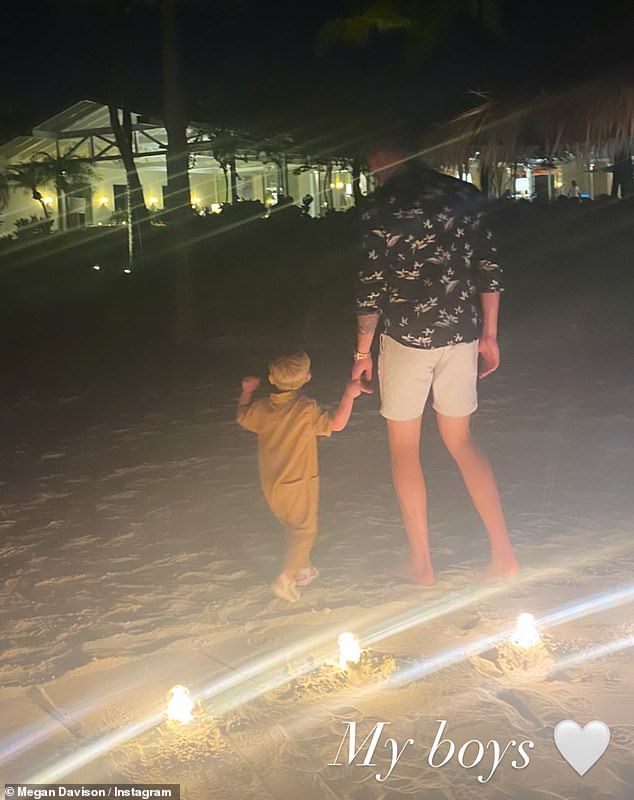 ‘My boys’: Jordan’s wife Megan also took to Instagram, during the early hours of Thursday morning, to share a photo of the England goalkeeper and his son walking hand-in-hand

In one snap, Jordan holding the hand of his son Arlo as they walked over a sand-covered surface towards a well-lit canvas.

Meanwhile his son wore a bright yellow jumpsuit and white sandals as he followed his father’s lead across the sand.

A second snap, uploaded by Megan, saw her leaning in towards husband Jordan as they shared a kiss with one another. 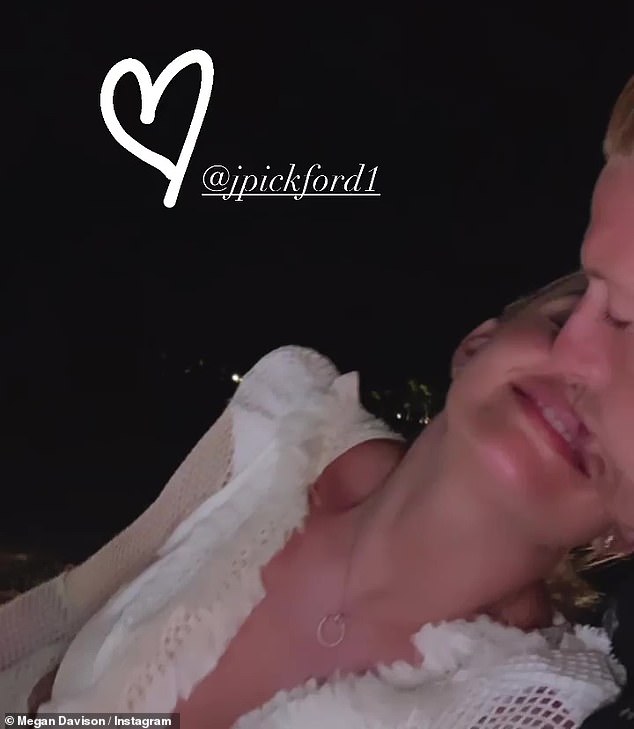 Intimate: A second snap, uploaded by Megan, saw her leaning in towards husband Jordan as they shared a kiss with one another

The holiday snaps come after the goalkeeper made sure he truly let his hair down at his homecoming bash last week.

Jordan was treated to an epic celebration by wife Megan and their family and he was sure to live it up in style.

In a video taken inside the bash, Jordan was seen to have whipped off the top of his Gucci co-ord and dance on his pal’s shoulders to the tune of Cher’s 1998 hit Believe, while Megan was mirroring his moves on another friend. 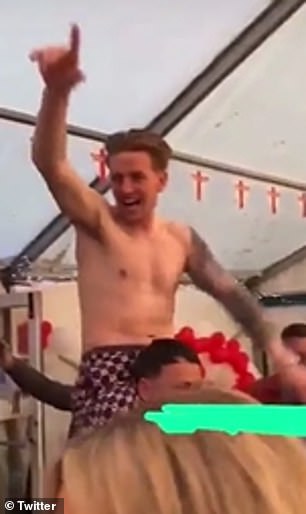 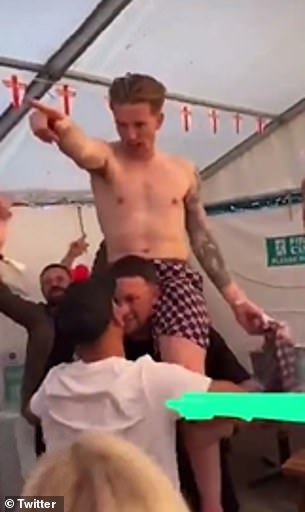 Wheyo! After his Euros heartache, Jordan made sure he truly let his hair down at his homecoming bash last week

The Three Lions fell just short of glory at Euro 2020 after losing to Italy in the final on penalties yet had plenty to celebrate as he arrived at the bash – complete with a marquee, balloons, bunting and personalised face masks featuring his image.

Jordan appeared to have truly got in the party spirit as he jumped on his friend’s shoulders in the crowded marquee and began belting out hits.

The whole group appeared to be having a sensational time as they sang songs and lived it up to celebrate and commiserated the sad loss.

With his arms splayed, Jordan shed his garish Gucci polo shirt – which he had paired with matching shorts – and sang the song to his heart’s content, while Megan was not to be outdone, as she too was sitting above the raucous crowd. 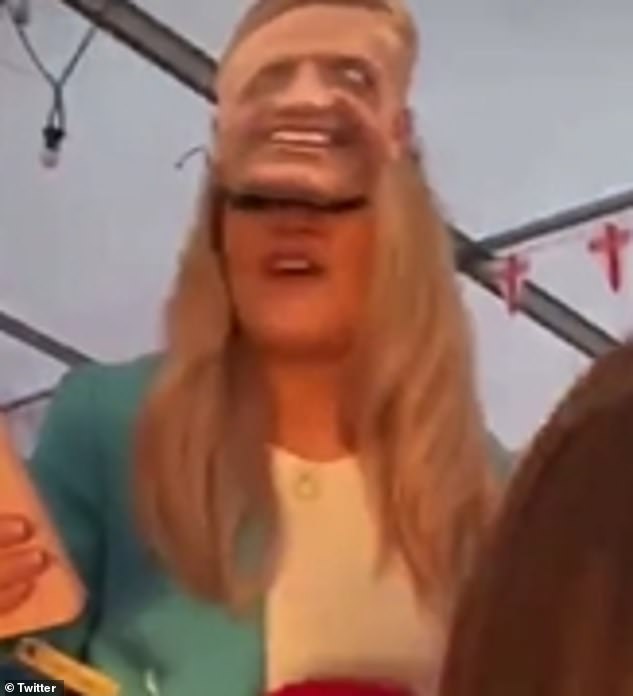 Woo! Megan was not to be outdone, as she too was sitting above the raucous crowd

Jordan could not hide his delight as he arrived at the bash and saw a mass of friends and family cheering to surprise him and celebrate his return from the gruelling tournament.

His son Arlo appeared in the mood to celebrate as he was clad in a Spiderman costume while zipping around the bash while Megan was dressed up in a chic blue blazer and white crop top.

The balloons at the bash were aplenty, with Welcome Back and England spelt out in inflated letters and other balloons reading: ‘We are so proud. Well done’.

Many revellers sported face masks featuring Jordan’s beaming image, with Megan posing with one of the shots. 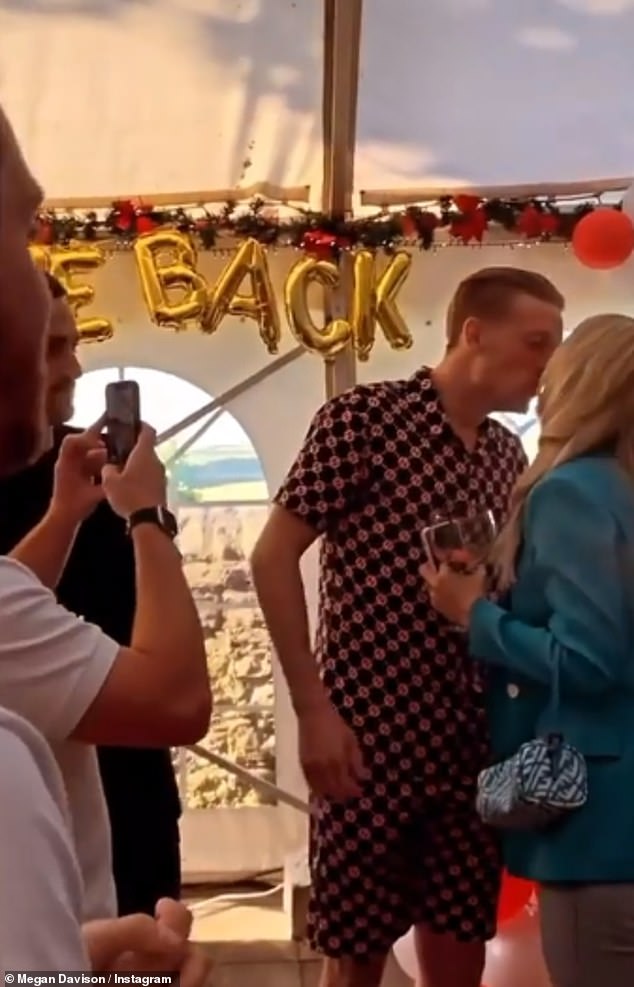 Amazing! He was treated to a huge crowd of revellers and kisses from his adoring wife Megan, who he wed last year

October 31, 2021
Christian Eriksen's agent insists the midfielder 'is in good shape' and...