Gareth Southgate has revealed Conor Coady is already part of his England leadership group – despite the Wolves captain only making his international debut last month.

Coady, 27, made his England bow in the goalless Nations League draw in Denmark on September 8 and has picked up two more caps since then.

The central defender started the 3-0 friendly win over Wales last week before playing the whole of the 1-0 loss to Denmark on Wednesday night. 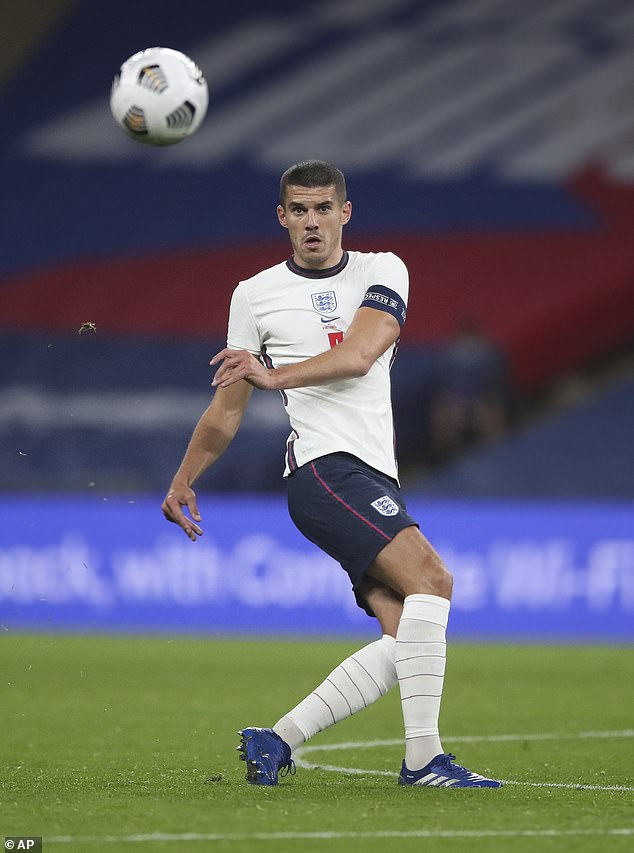 He may have minimal experience on the international stage but Southgate has already promoted Coady to his leadership group – a select band of players within his squad who are the go-to men for a largely inexperienced squad.

The group remains a fluid mix of players, with captain Harry Kane, Jordan Henderson, Raheem Sterling, Harry Maguire, Eric Dier and Marcus Rashford all having been a part of it for some time.

And now Coady is playing his part in that set-up too, with Southgate impressed by the former Liverpool youngster’s early England career.

‘In terms of the leadership group I mean it ends up having to change every time we are together slightly because we never, ever have a full squad to pick from,’ Southgate said after the Denmark defeat. 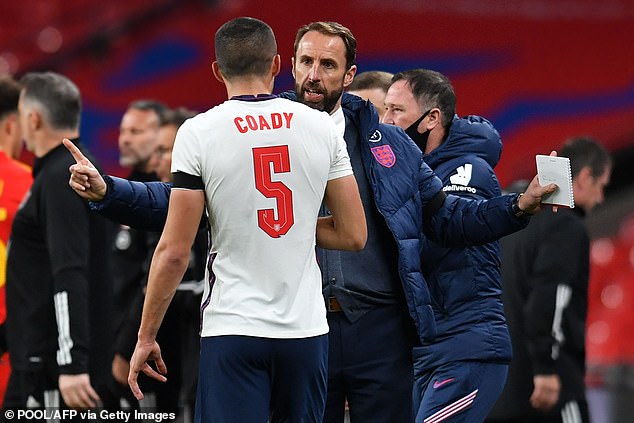 ‘But Conor Coady has been a great addition into that, for sure. His performance and the way him and Tyrone (Mings) organised the defence from the back really helped to keep us in that game.

‘They showed tremendous character and resilience to lead the team from that position, as did Kyle (Walker). The back-four really did a fantastic job.

‘I can’t criticise any of the players in terms of the way they played, I thought they were excellent.’

After dealing with further off-field issues, Southgate would have been delighted to pick up back-to-back wins against Wales and Belgium, who are the number-one ranked team in the world.

But the international break ended on a sour note as England lost at home for the first time in two years. Maguire was sent off in the first half before Reece James then saw red after the final whistle, with Christian Eriksen’s 35th-minute penalty deciding the Nations League encounter at Wembley.

‘The only negatives have been the two red cards, really,’ Southgate replied when asked for his assessment of the positives and negatives from the October internationals.

‘There were so many positives internally for us a group in terms of the steps we’ve made in players understanding how we want to play, the number of young players who have come in and played so well, a lot of new players that we’ve found in terms of their performances that they’re going to add to the squad and possibly to the team.

‘So I leave here frustrated that two decisions have cost us the game but in the end I’m so proud of what the players have done and the way they’ve been across the 10 days.

‘They’re a joy to work with. They are growing in resilience. They know how the level of training has to be every day. They know what’s expected of each other.’