Home Nations League Erling Haaland is aware of the marginal gains needed to evolve into...

It was a deflated Erling Haaland who faced the Norwegian television cameras early on in the most recent international break. His team had just been beaten in extra-time by Serbia, ending their hopes of qualifying for next summer’s European Championship.

For the 20-year-old striker, it was a rare setback on what has been an explosive, unstoppable rise to stardom in recent years. ‘I am really annoyed,’ said the youngster, before suggesting that his team-mates had not done enough to bring him into the game. ‘It was quite simply not good enough.’

Haaland would not be Haaland, however, if he let such disappointments get to him. A few days later, he was back to his bullish best, smashing three past Romania to record his first international hat-trick and take his national team tally to a remarkable six goals in six games. 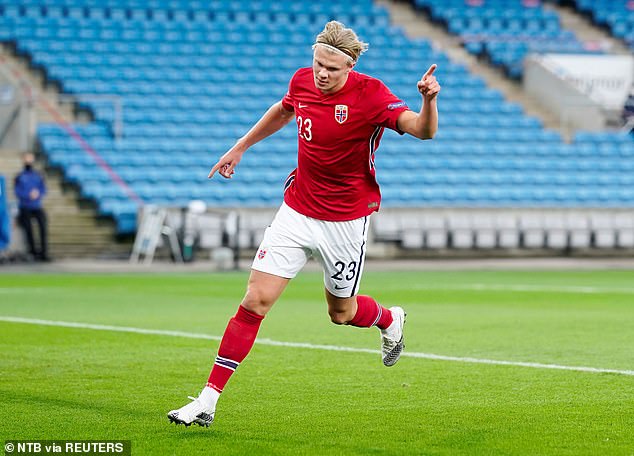 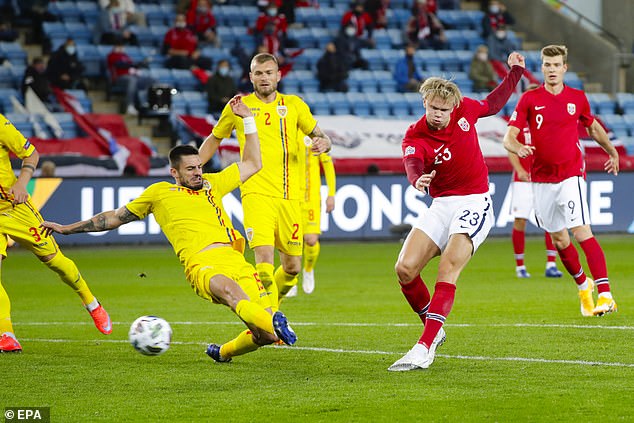 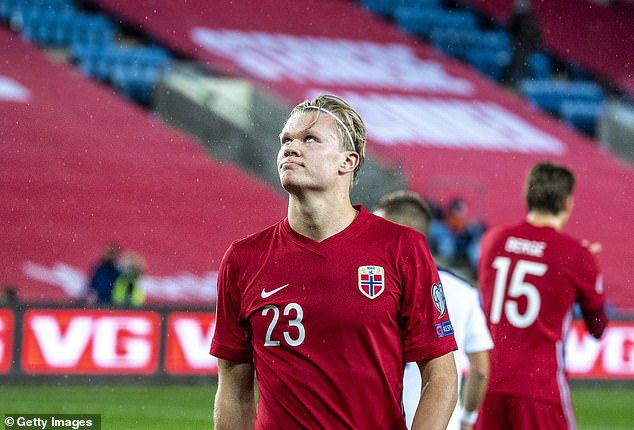 However, last week he was a source of frustration after Norway failed to qualify for the Euros

As anyone who has paid even the slightest attention to European football in the last 12 months will know, Haaland is a goalscorer. He is, by his own admission, ‘obsessed’ with scoring goals. And he does it better and more efficiently than most players could ever dream of – at the age of 20.

Real Madrid are keeping a close eye, as expected, and Marca report they will make a bid – he has a £63m release clause – if they can’t get Paris Saint-Germain’s Kylian Mbappe, another young forward with the world at his feet.

Haaland burst onto the scene just over a year ago with a hat-trick on his Champions League debut for Red Bull Salzburg. A few months later, he broke a Bundesliga record with five goals in his first 51 minutes as a Borussia Dortmund player. His cartoonish pace, lethal finishing and rocket-powered left foot have since become memes, instantly recognisable for football fans across the world.

Yet as obsessed as he is with scoring, Haaland is equally fixated on self-improvement. In a recent interview with Ruhr Nachrichten, he insisted that the ‘best Erling Haaland is still to come’.

That relentless drive for progress has always been part of Haaland’s story. His career path, from Molde to Salzburg to Dortmund, has been carefully crafted to allow him to steadily move through the gears of his own development. On the day-to-day level, he has bought wholesale the creed of Cristiano Ronaldo, that calculated self-optimisation is the key to greatness in modern football. For Haaland, that means seeking to gain tiny advantages in every way possible, from taking regular ice baths to using blue-light blocking glasses to improve his sleep. 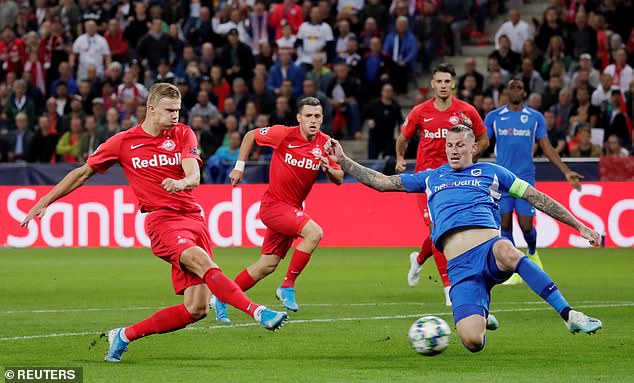 Ultimately, that pays dividends on the pitch. Even in his 10 months at Dortmund, Haaland has developed as a striker. When the Bundesliga returned last month, many noted that the Norwegian had returned from the summer break as a more muscular figure. His speed and finishing had not suffered, but Haaland now looked stronger, more able than ever to hold off an opponent while in possession.

‘Erling is only 20 years old, so it’s normal that he is getting more powerful and more robust,’ Dortmund sporting director Michael Zorc told Kicker magazine.

Others still see room for improvement elsewhere. At both Salzburg and Dortmund, Haaland’s goals have often fallen into one of two categories. There are the fox-in-the-box, first-touch tap-ins and there are the bulldozering forward runs behind the opposition back lines. Both work particularly well on the break, and both can be neutered – at least in theory – by a shrewd enough defence. 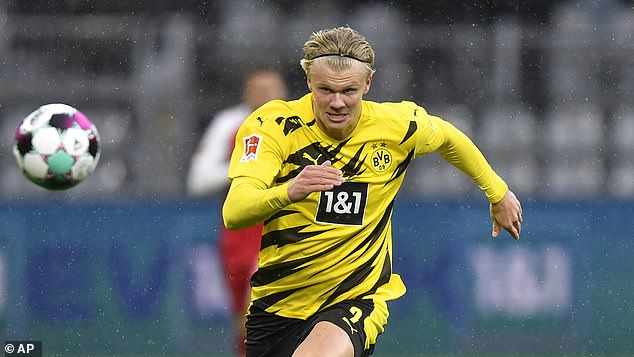 Now at Borussia Dortmund, the 20-year-old’s development as a striker has taken a step further

Germany’s record goalscorer Miroslav Klose believes that Haaland can only rely on those blistering counter-attacks and darting runs behind the back line for so long. ‘After two or three years, the other teams have analysed you and you need to adapt and change,’ the retired striker told Kicker.

In Klose’s view, Haaland will soon have to improve his short passing and link-up play if he is to maintain his current form or reach the next level. For his part, Haaland agrees with him.

‘My finishing needs to be more clinical and uncompromising, and I need to improve in the way I link up with my team-mates,’ he told Ruhr Nachrichten. 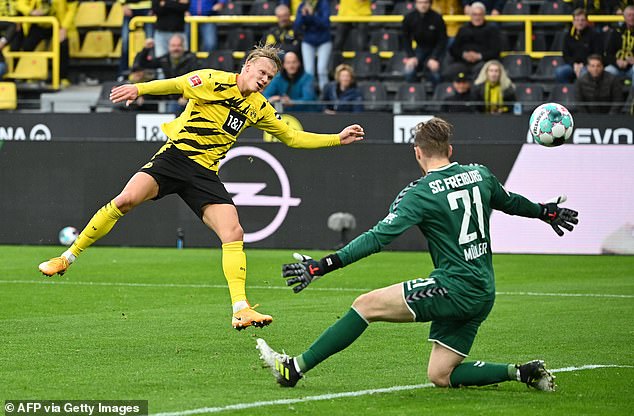 Despite the excellent start to his career, he acknowledges he needs to improve his finishing 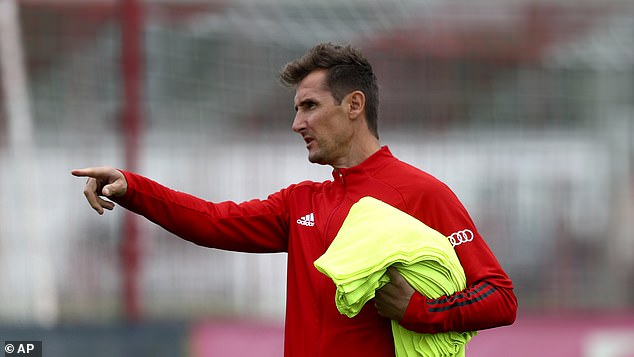 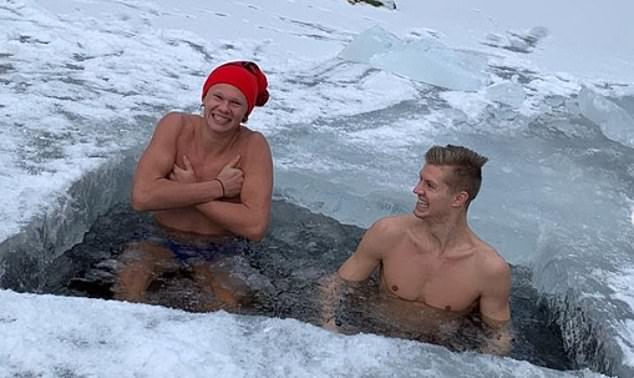 Happily enough, he has the perfect environment to do so at Dortmund. Alongside Jadon Sancho, Jude Bellingham and Giovanni Reyna, Haaland is no longer the lone talent at the Bundesliga’s second biggest club, but rather one part of a front-line boy band which some have dubbed ‘Dortmund’s wild youth’.

He has developed an increasingly devastating understanding with Reyna in particular. The two have conspired to find the net on several occasions already this season, most recently for the Norwegian’s goal in the midweek 3-1 defeat by Lazio in their Europa League opener.

Haaland summing up their partnership succinctly earlier this month. ‘You pass to me, I score,’ he said to American starlet Reyna after they had done just that in Dortmund’s 4-0 win over Freiburg.

It is not always so simple, as Haaland found to his frustration on international duty last week. After that hat-rick he drew a blank in a 1-0 win over Northern Ireland. Yet the better he works with his team-mates, the more complete a striker the Norwegian will become. That explosive, record-breaking last 12 months may yet be just the beginning. 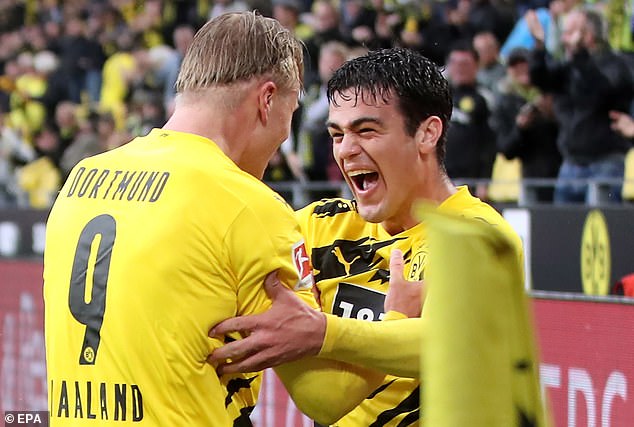 5,000 ticketless fans estimated to have broken into Wembley for Euro...