Italy closed this game down like vintage Azzurri and those standing behind the goal with faces painted and flags draped around shoulders slowly shuffled towards the goal of Gianluigi Donnarumma.

They had observed the social distancing measures diligently until that point but the tension was becoming too much to bear.

By the end, there were echoes a one-day cricket final with the crowd around the boundary rope and reminders were ringing around the public address system. 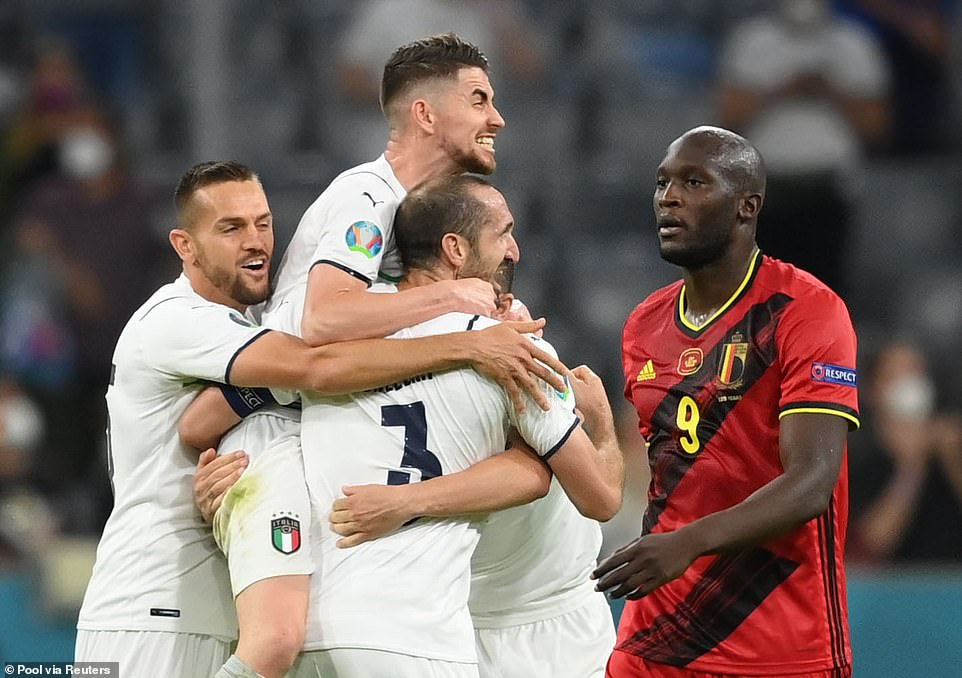 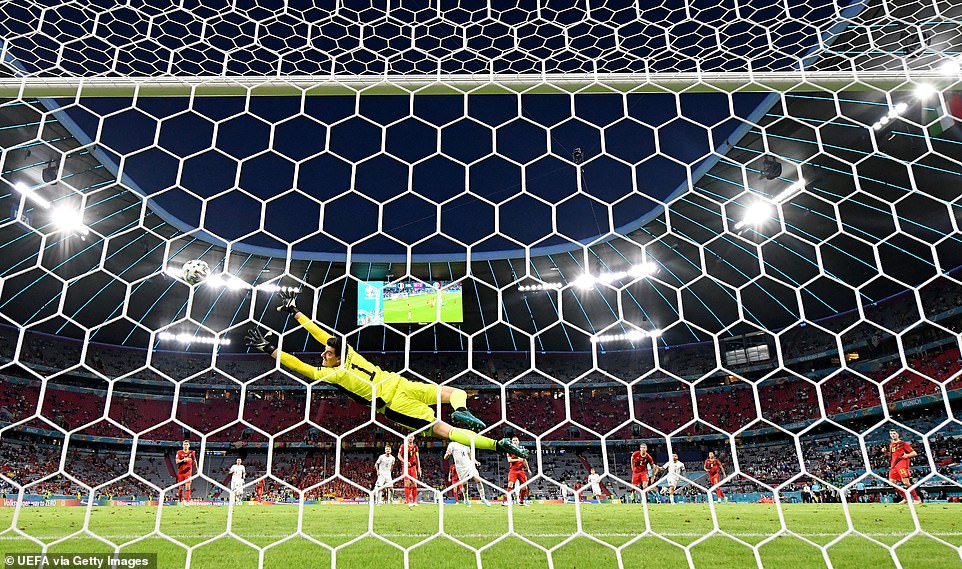 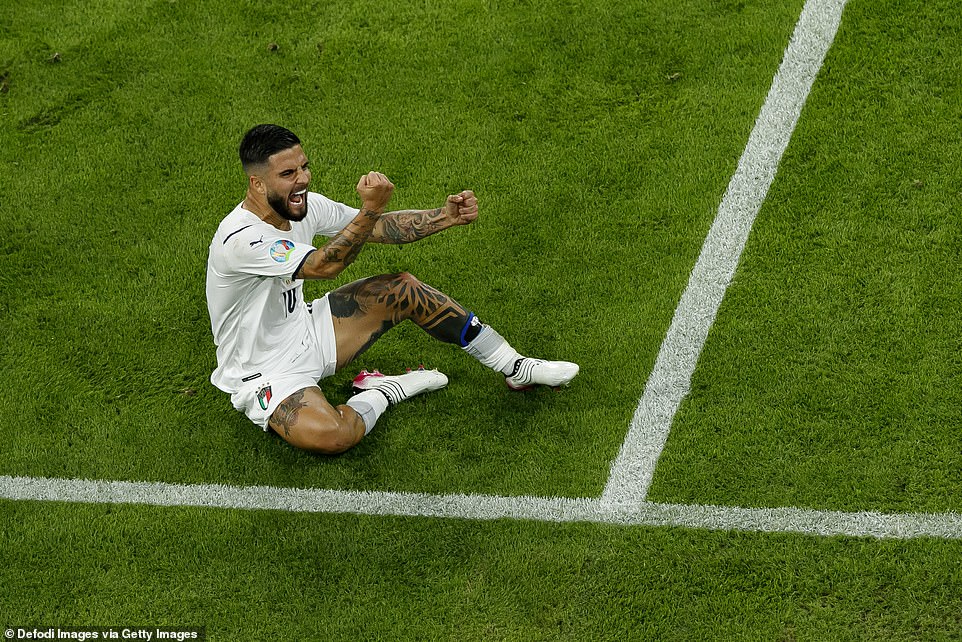 Italy defended their lead, breaking up the rhythm and suffocating Belgium into submission.

It will have thrilled Roberto Mancini to see them scrap together and limit one of the most potent attacking forces in international football to a single goal, and that a disputed penalty.

They celebrated saves, blocks and clearances as they protected the two goals scored in the first half by Nicolo Barella and Lorenzo Insigne, and they deserved their victory and a date with Spain in Tuesday’s semi-final at Wembley.

Mancini even might have allowed himself a smile if he recalled the Allianz Arena was the place where Carlos Tevez once refused to play for him in a Champions League tie against Bayern Munich.

This is a newly forged Italy team. They are a collective. They have experience at the back and they have quickly learned how to avoid defeat. The unbeaten run now stands at 32. 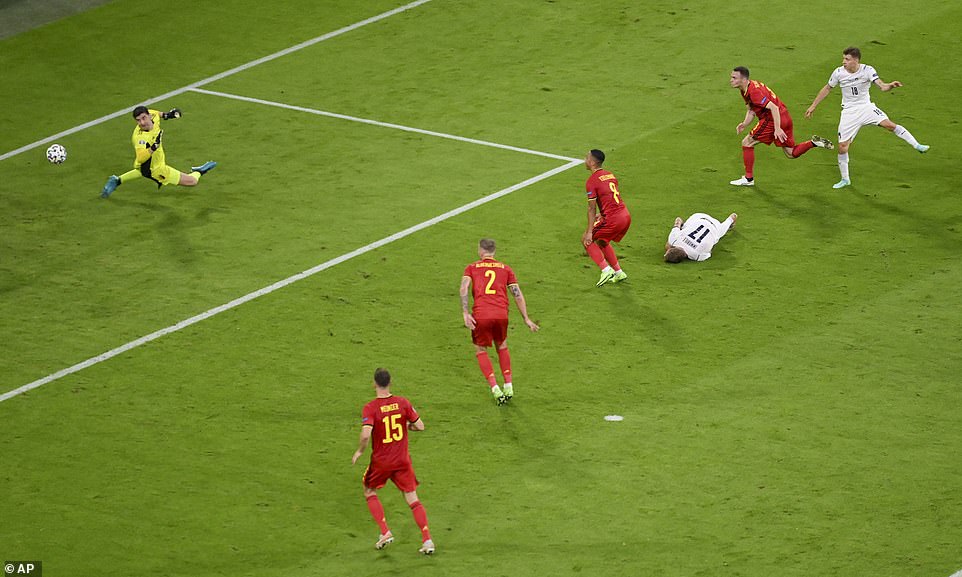 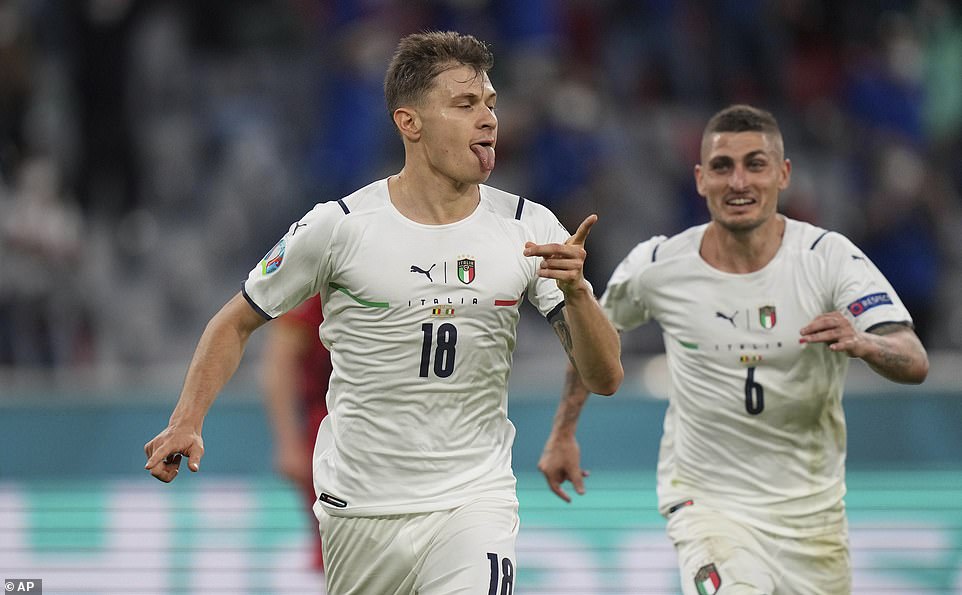 They have momentum and yet there is so much more to Mancini’s resurgent Italy than the dogged old-style defending. They exhilarate in attack. Quick and intense, they force mistakes and punish them.

This is exactly what they did in the first half, making the Belgian back-three of thirtysomethings look their age. They took risks, and could easily have conceded on the break against such talented opponents.

Eden Hazard was ruled out ahead of the game with a hamstring injury but Kevin de Bruyne was declared fit to start despite damaging ankle ligaments against Portugal on Sunday.

De Bruyne produced moments of wonder: turns, touches, passes and shots. He was still curling teasing crosses into a crowded penalty area in stoppage time but another major tournament ends in disappointment for this gifted Belgium squad.

But overall, the Italians were sharper and more clinical. They thought they had an early led when Leonardo Bonucci bundled a free-kick over the line at the back-post. 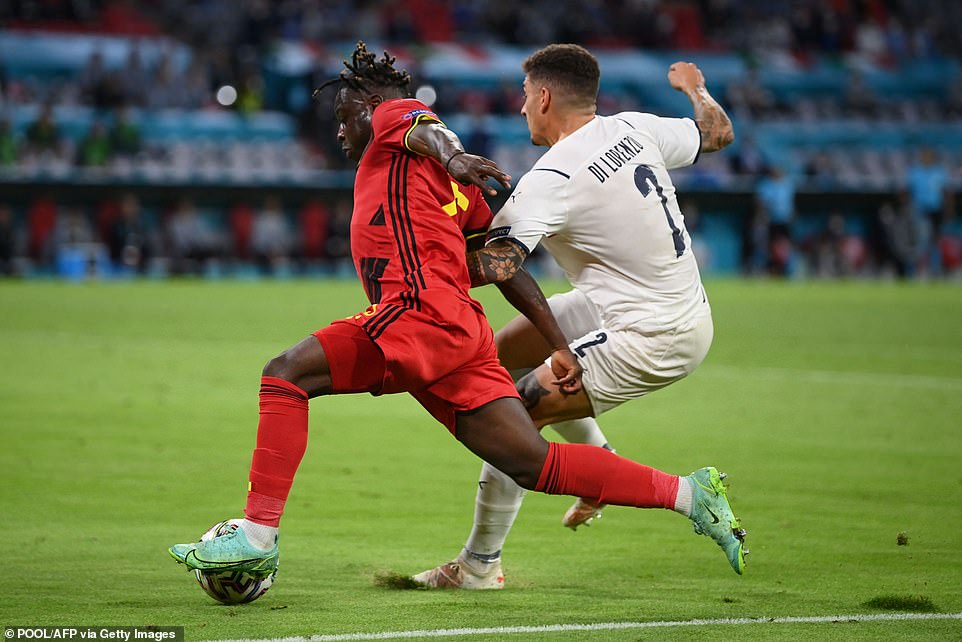 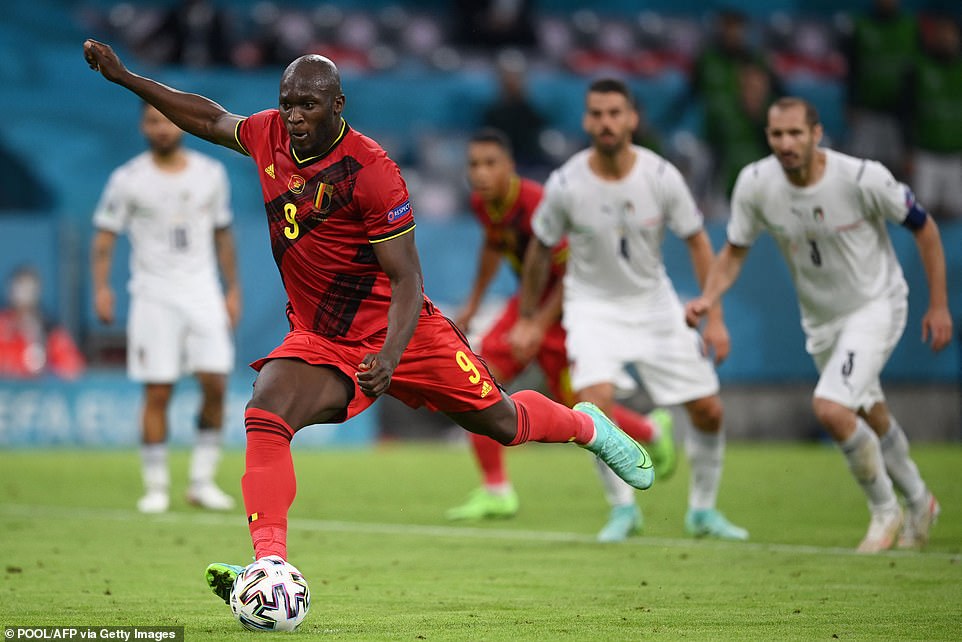 Romelu Lukaku made no mistake from the spot, slotting it down the middle to score his fourth goal of the tournament 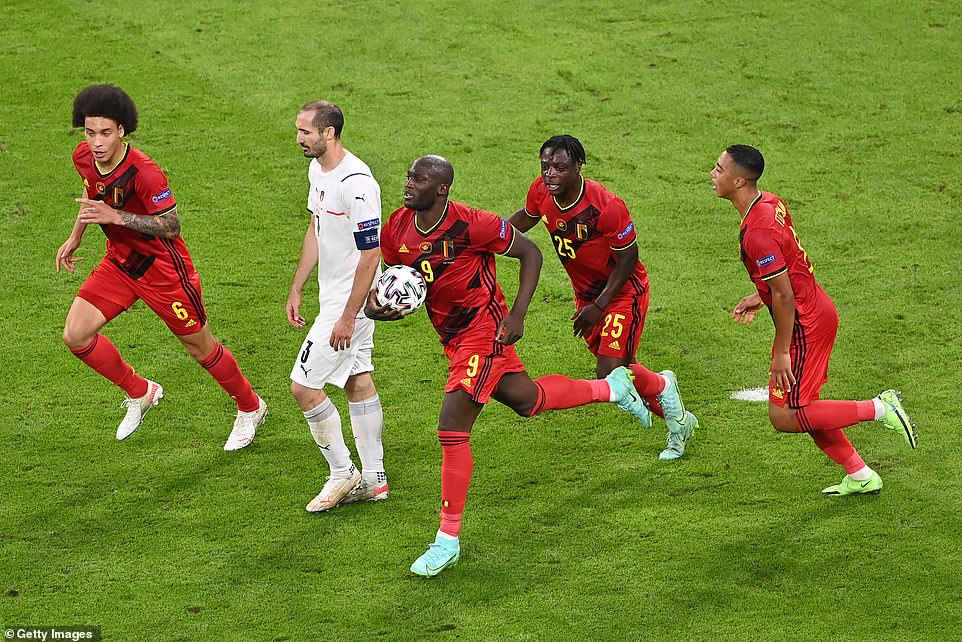 However, his strike was not enough to keep his side in the European Championship as Italy held out for a 2-1 victory

Bonucci was onside when the free-kick was taken. There was no flag and the celebrations were extensive. They went on for long, in fact, that by the time they came to an end, the VAR had seen the ball clip Giovanni di Lorenzo on the knee on its way through the crowded penalty area.

When Di Lorenzo touched the ball, Bonucci was offside and the goal was wiped out.

The drama of the disallowed goal served to energise what was already an open and high-tempo contest. Belgium responded well and the Italians kept them out with blocks on shot from Youri Tielemens and De Bruyne.

Donnarumma made flying saves to deny first De Bruyne and then Romelu Lukaku at the end of a sweeping counter-attacking move, featuring more brilliance from De Bruyne, who collected the ball deep in his own half and, seconds later, was creating a chance.

Italy pressed high, forcing mistakes from the Belgians at the back and winning set-pieces, and they took the lead in the 31st minute. 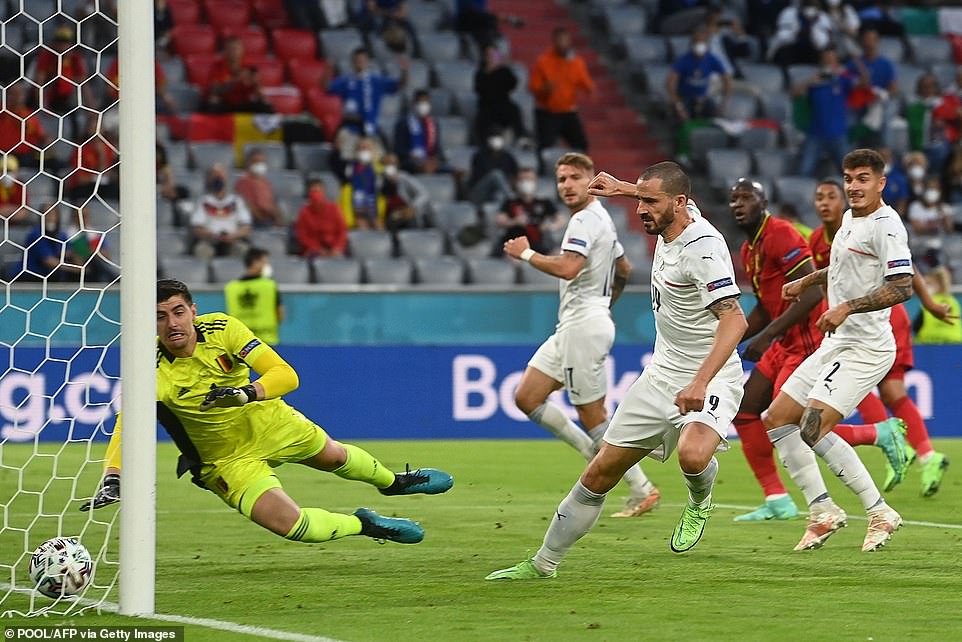 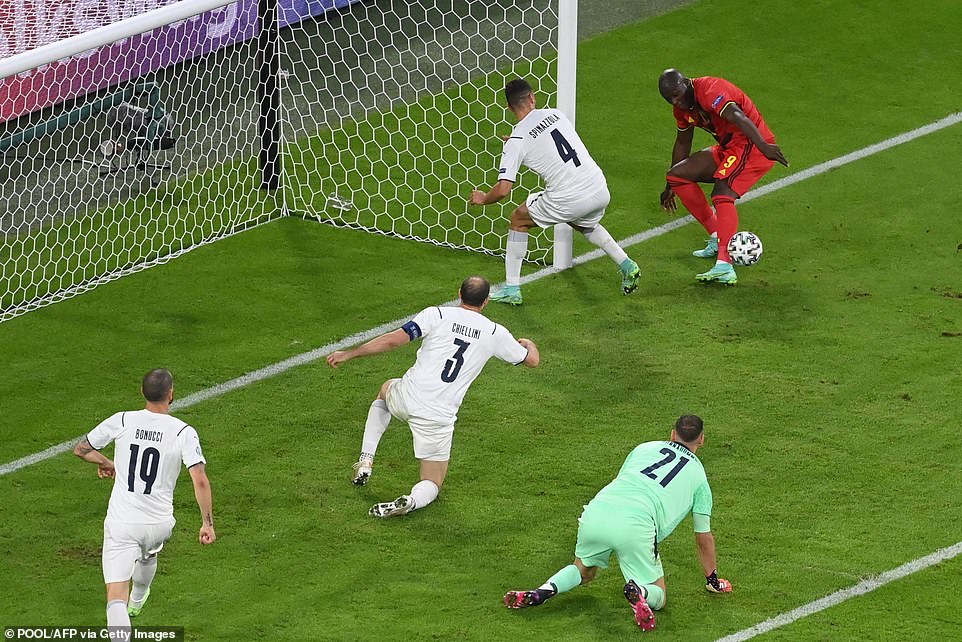 A quick free-kick was played into the feet of Ciro Immobile, who collapsed in a heap searching for a penalty. Play went on. Marco Verratti recycled possession and threaded a pass into Barella.

Immobile was still on the floor and Belgium’s defenders seemed afraid to make a tackle. Barella wriggled away from three red shirts, Thomas Vermaelen, Jan Vertonghen and Thorgan Hazard and smashed the ball past Thibaut Courtois from an angle. This time there was no reprieve.

Federico Chiesa went close before Insigne stretched the lead with a wonderful strike. Chopping inside Tielemens from the left, he was afforded time and space by Vermaelen and unleashed a fierce, curling shot from 25 yards.

Again, Courtois was beaten. Italy were 2-0 up and sensed their moment only to be infuriated when they conceded a soft penalty, seconds later.

Jeremy Doku sprinted into the penalty box, pursued by Di Lorenzo, who leaned into his man and sent him flying. Slovenian referee Slavko Vincic pointed to the spot and was backed by VAR. 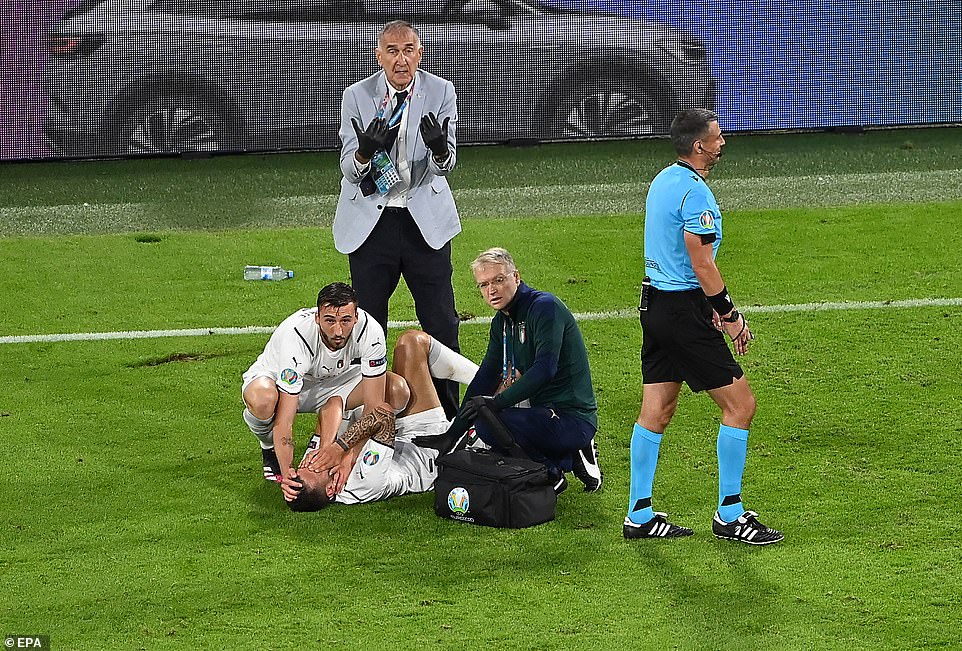 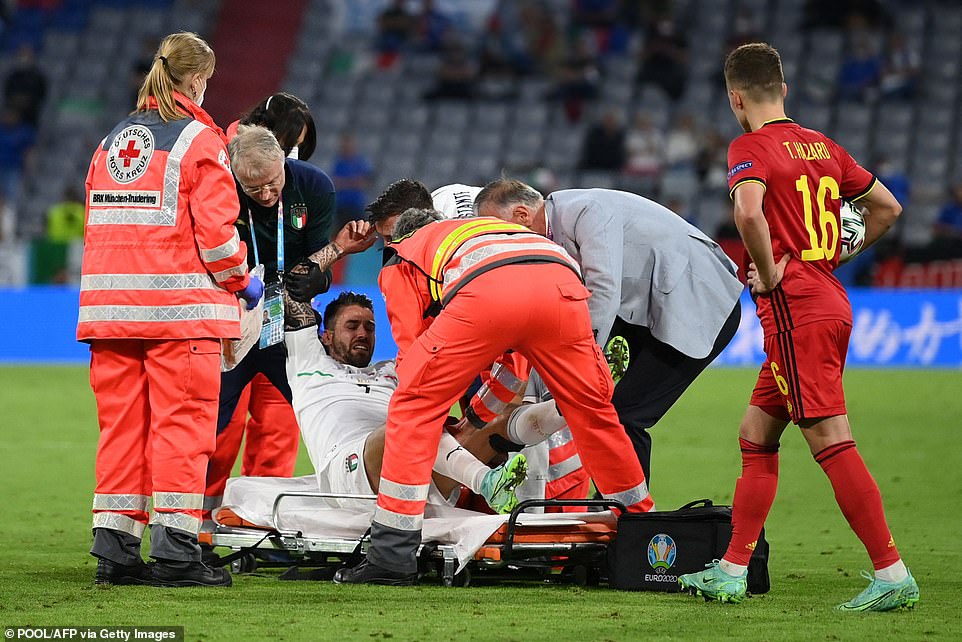 Lukaku stepped up to score, his 64th goal in 97 appearances for his country. It was the last kick of the first half and the Italians were still protesting as they went in for the interval.

The second half was a different sort of game. Italy leaned once again on their defensive expertise and broke up play. Belgium found it difficult to create any rhythm.

The closest they came to equalisers were a cross by De Bruyne when Leonardo Spinazzola denied Lukaku at the back post. Lukaku went close again, almost reaching a deflected cross from Nacer Chadli.

But the closing minutes were littered with injuries and substitutions. Chadli was injured within minutes of coming in and Spinazzola was carried off after pulling a hamstring.

Mancini will miss his influential left-back if that proves to be the end of his tournament but Italy move on to Wembley. Belgium head for home, wondering if this was the last chance for their golden generation. 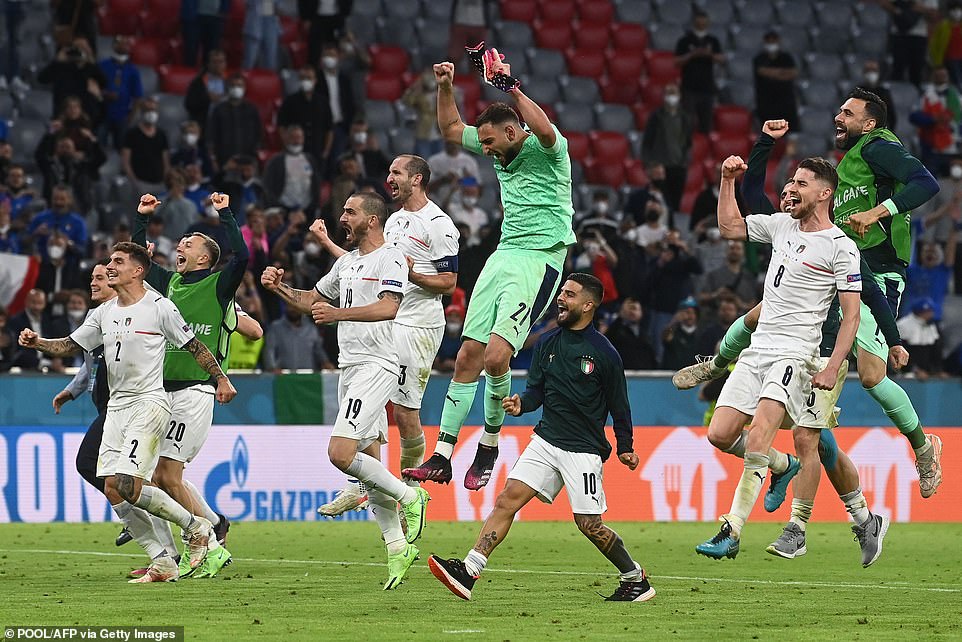 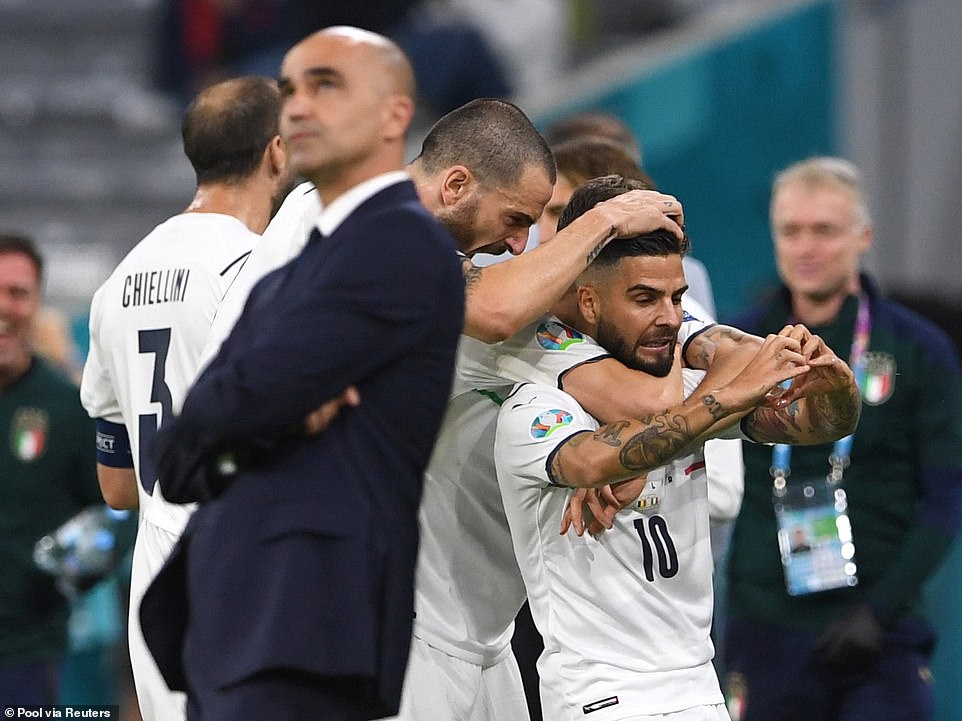 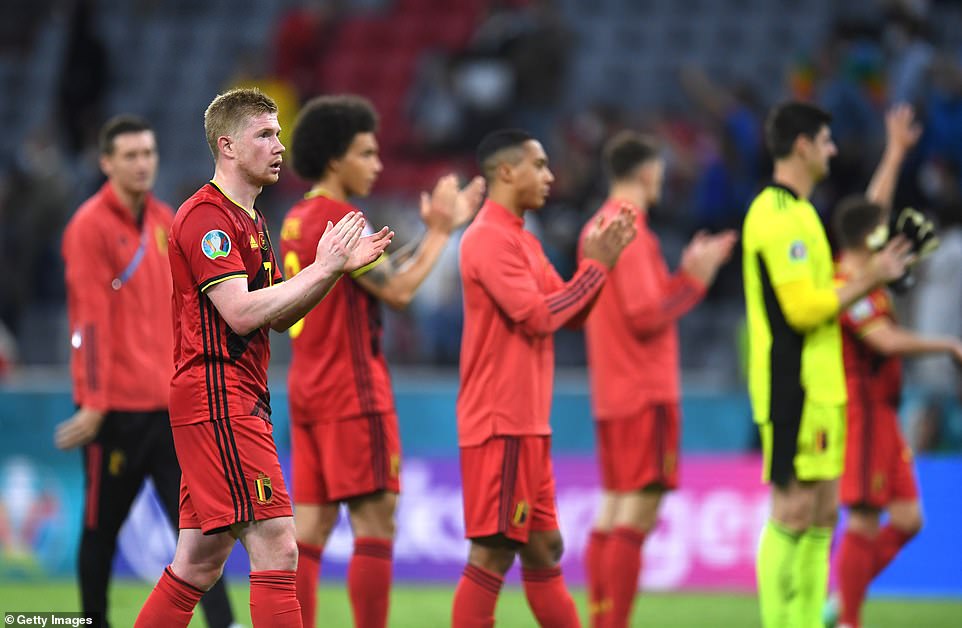 RE-LIVE ALL THE ACTION AS IT HAPPENED…

Roberto Martinez confirms he is NOT quitting as Belgium manager